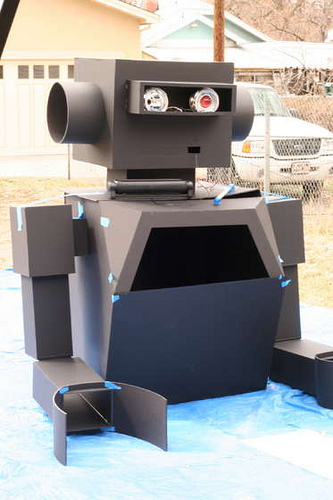 Using your imagination, you can find everything you need to build a robot. From using old boxes and spare parts, you can customize your robot with things you already have or can acquire for free. Taking apart some car headlights, getting free cardboard at an appliance store, figuring out what you already have and what you can do with it is half the fun.
The author luckily rear ended a car a few weeks before he started this project so he decided to salvage the headlight. They ended up being perfect robot eyes. After taking apart the headlight I needed lights. It had to be battery operated so it would be easy to transport and assemble.He found an old bike light that blinked and strobed and placed it in the housing. As for the ring of light, it ran on a 9 V battery that I wired a switch to.
wanted the eyes in a box to resemble a retro robot. Other inspirations were Wall-E and Johnny 5. I used an Ensure box because it was the perfect size. As the author couldn’t decide on what the head should look like so he made a small prototype before he committed to anything larger.
Using a old car wheel box and some FedEx boxes he taped some parts together to get a general feel of the look. Depending on the boxes you have and what you use, your robot can look anyway you choose.
Using the boxes from the appliance store he started construction on the arms.
He used the foamcore hinges to add mobility to the elbows. Throughout the entire project he used the blue tape to tape the parts together and when he got the parts the size he wanted, he hot glued the insides and removed the tape. The final claws were scored in the same way as the robot ears.
Lastly I added the final touches before painting. A notch was cut for the scrolling LED bar plug. I decided to create antennas for the ears for more details.