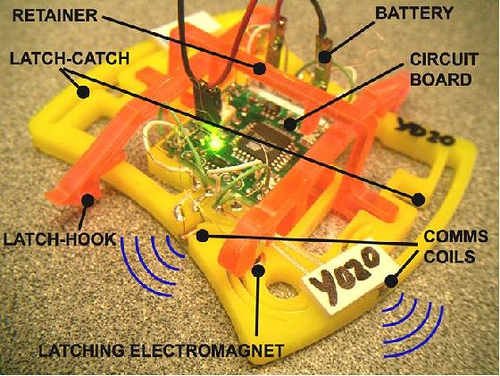 How to build your own autonomous, self-assembling robots. This project describes every detail of the robots used in our scientific research including all CAD files, source code, assembly, etc. Hopefully everything you would need to reproduce our experiments, or have a fun toy.

Step 1 Making the printed circuit boards (PCB’s)
The PCB’s were designed using the Eagle PCB design software. I’ve attached the Eagle CAD files as well as the Gerber files. The Gerber files are what you can send directly to a PCB fabrication service to get the boards made. I also included panelized gerber files – this version has 16 of the robot pcb’s per panel for more cost efficient manufacturing.

Step 2 electronics overview
We designed the electronics to be simple and flexible, because we had not finalized the robot design when we started and planned to try a variety of control algorithms, actuators, and communications methods. We also needed the electronics to be small and light. We decided to go with fairly small SMT parts for the final design, and were able to get a microcontroller, 10 status LED’s, 4 FET’s for driving actuators, and the programming/power header onto the 25mm x 25mm board, plus connection points for 4 actuators and 4 sensors. We tried making the board even smaller, but it became too hard to assemble. Our strategy for simple and flexible worked out – we’ve since used leftover boards for 3 other, totally unrelated projects.


Step 3 Actuators overview
The robot has two electromagnetically-actuated latches. The red arm of the latch has a 3mm cube magnet (NdFeB type) press-fit into it, while the yellow base of the robot has a cylindrical coil press-fit into it. The coils were custom-made to the following specifications: 700 turns of 42-guage magnet wire, 4mm length, wound on a 2mm spindle. This resulted in a diameter of approximately 4mm OD, 2mm ID. We selected these coil specifications so that we could drive them directly from the robot power source and have a reasonable amount of power. We originally tried to put a magnetic core in the coil, which makes it much more powerful, but we could not find a core which did not remain magnetized after the coil turned off, and we did not have the capability to reverse the coil polarity (this requires 4 FET’s per actuator instead of 1).

Step 4 Communications
The robots use inductive coupling for short-range wireless communications. Each robot has 4 small (3mm x 2mm) coils, one on ecah face. They are mounted flush with the face, so that when two robots properly mate on a face, the coils are always within a couple mm of each other. Recall that we are using a simple 8-bit microcontroller with 1K of RAM, maximum analog-to-digital sampling rate of 10khz, and total clock rate of 8Mhz. There is no digital-to-analog circuitry at all. So I doubt that it is possible to transmit or receive AM or FM since the coil’s resonant frequency is higher than the A/D sample rate, and there is no way to generate sine waves anyway. Also there is not enough computing power for much FFT. So instead we realized that we had very little data to send, so we could do it very slowly. We simply send electromagnetic pulses by turning on and off the comm coil. Each time the coil is turned on or off, it generates a short EM pulse train at its natural frequency. Any nearby coil is magnetically coupled, and generates corresponding pulses at its output. We just look for those pulses using the A/D on the microcontroller. Since the pulse frequency is higher than the A/D sample rate, we can’t count on seeing every pulse. So we send a lot of pulses and do a lot of looking. It works. The Biggest Hack Ever! Once there are a bunch of these robots all bouncing around on the air table, the environment gets pretty chaotic. We kept adding layers of error-detection and correction in the software, and eventually got the comms reliabilty up to perhaps 1 error per hour for 50 randomly colliding units. After all this, the data transfer rate between two robots is 2 bytes every 2 seconds. That’s Bytes, not kilo-bytes. Maximum, assuming no data collisions or errors. Each coil is used for both sending and receiving data, so there sometimes is a collision requiring retransmit. Sending data takes about 200ms and is done randomly within a 2000ms window, with retransmit on collision.