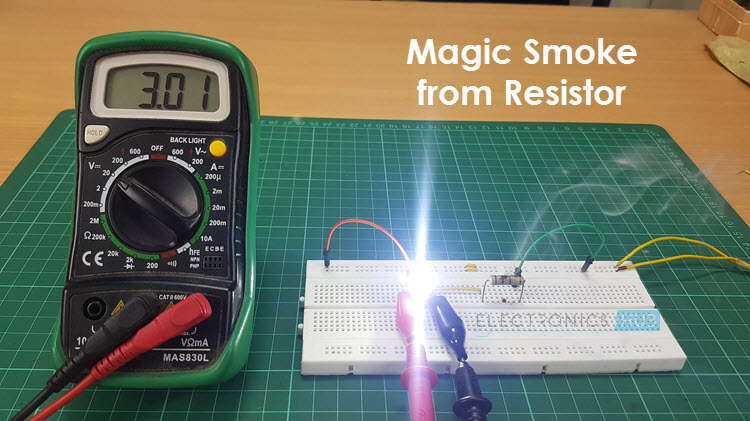 In this project, we will build few simple LED Circuits. Nowadays, people are investing more in LEDs due to their energy efficiency. Home lighting, office lighting, Automobile lighting, Street lighting etc. are all being implemented using LED.

LEDs are very sensitive components with respect to voltage and current and they must be provided with rated current and voltage values. Beginners in electronics often start with LEDs and the first project would be blinking an LED.

Wrong voltage or current to LED will burn them off. For small projects like blinking an LED, we need not worry about burning LEDs as we can connect a small resistor (like a 330Ω) in series with the LED (for a 5V supply).

But as the complexity of the circuit increases, choosing the right resistor with right wattage is important. So, in this project, which is more of a tutorial, we will build some simple LED circuits like a simple single LED Circuit, LEDs in series, LEDs in parallel and high power LEDs.

The first circuit in the simple LED Circuits is a single LED Circuit. We will try to turn ON a single 5mm White LED using a 12V Supply. The circuit diagram for this circuit is shown below.

The following image shows the setup of single LED connected to a 12V Supply and a current limiting series resistor. The important component (other than the LED of course) is the Resistor. Connecting a small LED to a 12V Supply would burn the LED and you can see the magic smoke instantly.

So, selecting the right resistor with the right wattage is very important. First, we will calculate the resistance.

The value of the series resistor can be calculated using the following formula.

Here, VS is the Source or Supply Voltage

VLED is the voltage drop across the LED and

ILED is the desired current through the LED.

In our simple LED Circuit consisting of a single LED, we have used a 5mm White LED and a power supply of 12V.

Therefore, VS = 12V, VLED = 3.6V and ILED = 30mA. Substituting these values in the above equation, we can calculate the value of Series Resistance as

Now that we have calculated the resistance of the series resistor, the next step is to calculate the power rating of this resistor.

Here, VRES is the voltage drop across the resistor and

IRES is the current through the Resistor.


We know that supply voltage is 12V and Voltage drop across LED is 3.6V. So, the Voltage Drop across the Series Resistor is

Substituting these values in the above formula, we get the power dissipated by the resistor.

To be on the safe side, we always have to pick the next possible value and hence we have chosen a ½ Watt (0.5 Watt) Resistor.

Once the right resistor is selected, we can connect the resistor in series and give the 12V Supply to the LED.

The next circuit in the Simple LED Circuits project is connecting LEDs in series. In this circuit, we will connect three 5mm White LEDs is series with the same 12V Supply. The following image shows the circuit diagram of the LEDs in Series.

Circuit Diagram of LEDs in Series

Components Required for LEDs in Series

Once all the components are selected, we can connect them on a breadboard and power on the circuit using a 12V Supply. All the three LEDs in Series will light up with maximum intensity.

The final circuit in the simple LED Circuits tutorial is LEDs in Parallel. In this circuit, we will try to connect three 5mm White LEDs in parallel and light them up using a 12V Supply. The Circuit Diagram for LEDs in Parallel Connection is shown in the following image.

Circuit Diagram of LEDs in Parallel

Components Required for LEDs in Parallel

Now, since the LEDs are connected in parallel, the current required for all the LEDs is equal to three times that of the individual current through the LED (which is 30mA).

Connect the three LEDs in Parallel and also connect the 100Ω (1 Watt) Resistor in series with the power supply. Up on turning on the supply, all the LEDs will light up.

Warning: It is very dangerous to use 230V AC Supply on breadboard. Be extremely careful.

Warning: Even this project uses 230V AC for powering the LED Light Bulb. Be cautious when handling mains supply.