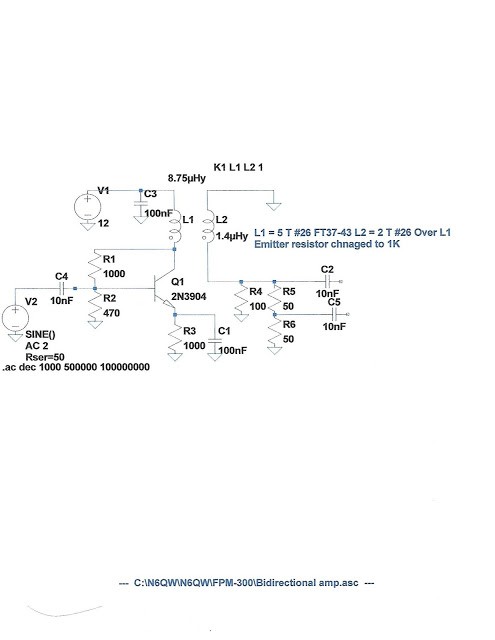 
FPM5 ~ How to save from pulling out your hair!

Well it has been nearly a week since getting the FPM5 in a box and I can truly say this has been some ride. Firstly the adage “if it ain’t broke don’t fix it” rings true. The rig worked great “al fresco” hay wired into place but once getting it into a box with proper grounding and short leads it is then that the warts show up. Thus I have been working down a list of issues and one by one these are being resolved.
Finally I was at the point of why there was way too much intermediate RF gain at 75 Meters and the transmitted signals were anemic on 20 & 15 Meters. This is where we can be tripped up by thinking we know something, discounting it and then keep coming back to the same point with nothing being changed.
A long time ago I developed a circuit that is a relay switched bidirectional amp consisting of two legs and employing the ubiquitous 2N3904 NPN transistor. This device is usually available in quantities for a price around 4 cents. You can beat that! Typically my bidirectional design had one leg be the receiver RF amp on Rx and on transmit the other leg was the pre-driver for transmit. This has served me well and is typically my “go to” circuit. I guess my experience with the KWM-4 should have been a large blinking sign but some how my brain ignored it until now.
Finally today I decided to put my circuit to the acid test using LT Spice. About five years ago I hay-wired it together –it worked and I moved on. But I had never subjected the design to a rigorous evaluation. That was my first mistake! Simulating the circuit with new values provides a rigorous look at a real gain plot and this looks much better.
Here is what I observed. First there was way too much inductance on the transformers. By empirically reducing the turns on the primary to 5 turns and the secondary to 2 turns the impedance transformation was 25/4 = 6.25. The secondary side always sees 50 Ohms because of the fixed resistive load of the 100 Ohm fixed and 100 Trim pot in parallel. The output is taken off of the center wiper through a 10NF cap. This says the primary load is reflected back into the secondary as a load of 300 ohms. The next thing I did was to look at the emitter  of the 2N3904. Initially I had a 50 Ohm resistor in parallel with a 100 NF cap. I tried adjusting that value and with 1K in parallel with the 100 NF this seemed to provide a flatter curve and shifted the center hump past 10 MHz which now aligns with the intended operation on 75, 40, 20 and 15 Meters.
The modified circuit is presented below: Note the two 50 Ohm resistors in series simulate the 100 Ohm trim pot with the center wiper at midpoint.
﻿
Previous PostNext Post
BROWSE