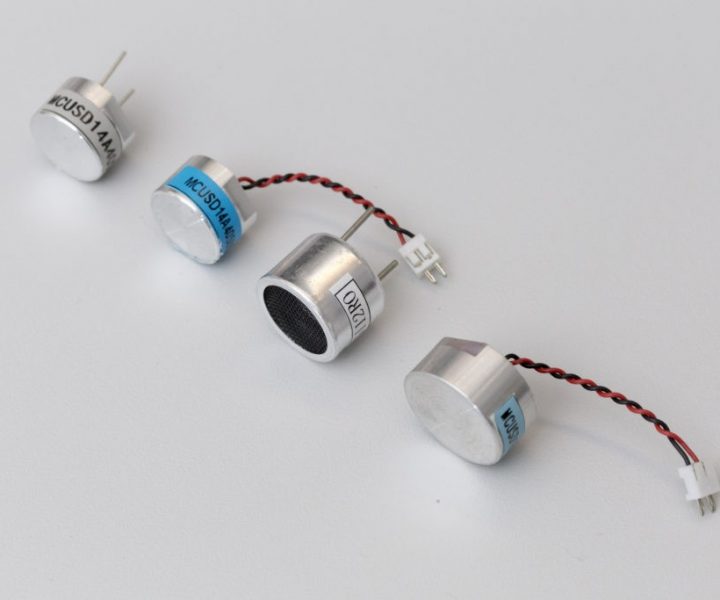 It’s been way too long since the last post in my Ultrasonic Anemometer series. But better late then never.

So far I have always used the same type of transducers. When I started this project I looked around and found the Multicomp MCUSD16A40S12RO. They were comparatively cheap and readily available so I ordered some and used nothing else for the next two or so years.

However, they are not hermetically sealed and therefore not the most suitable type to use outdoors all year around. Some of you have already experimented with other, truely watertight types and have reported that the signal level with those is dramatically lower. So I decided to see what’s available and do a more systematic comparison. That’s what this post is about.

You might wonder why I’m only considering Multicomp models but those 3 models are pretty much all the 40kHz watertight transducers I can get from Farnell.

So what I did is I attached all 4 models to the same anemometer so that I can switch back and forth between them. That turned out to be rather tedious and time consuming and resulted in a big mess of wires so I was happy that I only had 4 types to worry about.

I’ve measured the signal after the first (fixed gain) stage of the op-amp. So the signal reported here is already boosted up by a factor of 11.

Let’s first look at the model used so far. As we already know it delivers a solid signal amplitude.

Zooming in at the burst at the center of the screen (the one with the smalles amplitude) gives us a reading of 1.9 volts peak-to-peak.

Let’s look at the first waterproof model. The signal amplitude us barely noticable at first.

Zooming in (both horizontally and vertically) then reveals the amplitude: 47 millivolts, a factor of 40 less than the benchmark model.

Next in line is a transducer that looks virtually identical but has a pair of drilled wires at the back as opposed to just two pins. The overview looks just like before.

Zooming in shows an even smaller signal amplitude of only 37millivolts. That’s surprising because it has somewhat better specs compared to the previous model.

Once again, the overview shows hardly anything for the 18mm model.

Zooming in we find an amplitude of 38 millivolts, basically the same as the last model.

The first fact is obvious: with hermetically sealed transducers you can only expect a small fraction of the signal at the input.  I knew that but was still surprised to find how much smaller that singal is.  In this comparison it’s a factor of 40in the very best case.

But an anemometer is useless if it cannot withstand the elements so I guess we have to live with that. I will use the 14mm without wires type going forward. Not only did it perfom best in my comparison but it is also the most affordable (waterproof) model. Apart from that I like its small 14mm form factor allowing for slim designs posing less resistance to the airflow.

We obviously need to make some hardware changes to deal with the low signal amplitude. The most obvious solution is more gain. We can get more gain of the first (fixed gain) stage by just changing a resistor. However, we need to be careful not to push the op amp beyond its limits. I’ve looked at the LMC6482 datasheet again and found a gain/bandwidth product of 1.5MHz. That means we can get a maximum gain of 37.5 at 40kHz. You probably don’t want to push the op amp right to its limit so something like 31 (changing the 10k resistor to 30k)  is probably about the best we can do here.  That gives us an extra factor of 2.82.

Making the physical design smaller and therefore reducing the distance between the transducers is another thing we can do.  The current desing is 245mm which is rather large. Someone has reported to me that he reduced that all the way down to 100mm. I don’t think I will go that far but will try 120mm which is about half of what I have now. That should double the signal amplitude. And the smaller transducers should make the task easier.

The two measures combined give an extra gain of factor 5.6. That leaves us with another factor 7 to be compensated elsewhere. Fortunately, we still have a second op amp stage (the one controlled by software) which hasn’t been doing much so far.  With the previous transducer model it only had to deliver something like a factor 1.5. If we boos this up to 10 we pretty much have all we need.

During my tests I also discovered some weird software behaviour when the signal (after both stages of amplification) is not in the expected range. USB may hang, among other things. The pulse-sending sequence can also get upset. Someone had reported this to me earlier but I wasn’t able to reproduce the problem until now. I don’t expect this to be a major thing to fix but you never know. But I’ll definitely look into this.