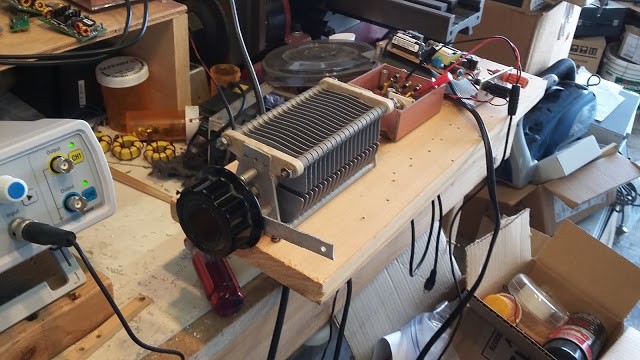 Heading into the Final Stretch!

Yes Virginia there once was the Analog VFO which today has largely been supplanted by DDS and PLL chips. Bill, N2CQR conducts a monthly podcast (soldersmoke.blogspot.com) where I just ride along and join in on the banter. Bill is a strong proponent of the Analog VFO’s while I tend to the PLL and DDS variety. Bill frequently reminds me of our different views almost to the point suggesting that perhaps I forgot how to create such devices. So just in case any one else has a similar view…  I will be posting a youtube video of the VFO in action.

In preparation for the integration into the case, I designed a combination 1st Mixer [SBL-1] and Band Pass Filter board using 5 bands of my choice. I cut the board on my CNC Mill. Total elapsed time was about 1/2 hour using G Simple for the design and then translation to .dxf files and finally the G Code which is a text file used by the Mach 3 milling software.
I placed the SBL-1 on the board so you can see where it will be installed. The five band pass filter will be relay selected using a series of 10 relays, 5 relays each on a common buss. The wiring for the relays will be behind the board which will be installed in a vertical position. This follows a similar board I used in the KWM-4 project which is shown in the 2nd photo. Pretty Cool stuff guys!

Here is the FPM5 with the cool blue front panel.

We are heading into the final phases of construction as the front panel work sans the painting is almost done.