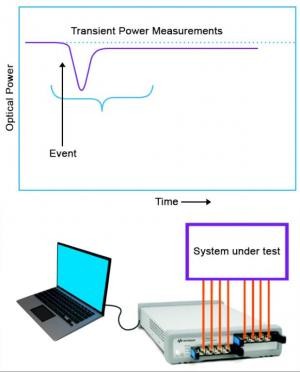 Measuring optical power level changes, to determine fiberoptic switching times or to observe transient fluctuations from fiber movement or network reconfiguration, goes beyond the design of most fiberoptic power meters. These instruments are generally designed for calibrated determination of optical power levels that are constant or change in synchronization with other instruments. The typical sample rates like 10 kHz, data capacity of perhaps 100,000 samples, and data transfer speed to the controller are often insufficient for general time-dependent measurements. Instead, alternative setups such as a fast optical-to-electrical converter combined with an oscilloscope, have been used and described in standards. These often sacrifice optical power calibration, involve additional integration effort, and it is likely that they are implemented with an over-dimensioned scope bandwidth.


This note describes the details for making time-dependent measurements of optical power levels, for applications like testing transients and determining switching times.