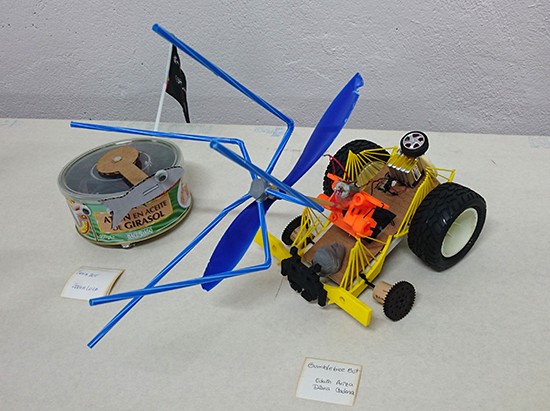 Being a dumb and clumsy robot has never been as fun as in the stupid robots competition Hebocon. This competition series is described as “robot contests for the technically ungifted” by its creator Daiju Ishikawa, and encourages anyone to join with no prior knowledge of robotics necessary.

What’s neat is that unlike other awards, Hebocon’s are symbolic as they are usually made out of recycled parts from every robot in the competition!

So far there have been two editions of Hebocon in Spain (Valencia and Makespace Madrid) where our very own David Cuartielles participated as a judge.

Last weekend, Cuartielles was invited to the Hebocon World Championship in Tokyo where he served on the judging panel alongside Nifty’s Dr. Kunio Matsui and an executive from NicoTsuku (a company dedicated to digital communities). The event drew a total of 32 robots from all across the world, including the United States, Hong Kong, Iceland, France, Singapore, Greece, Taiwan and Japan.

Nifty Award: An unusual car with a spinning doll that shot fake banknotes

NicoTsuku Award: A robot with a middle-age man that turned a table upside down (a literal representation of a Japanese colloquial expression that means getting mad)

Arduino/Genuino Award: A crocodile robot made by a 10-year-old that previously participated in Maker Faire Tokyo

The ‘Remote-Controlled Robot’ from Hong Kong won the sumo competition and it was about fooling the opponent by switching the roles of the remote control and the robot.

Thanks for inviting us to Hebocon’s World Championship 2016! Check out more on Twitter!