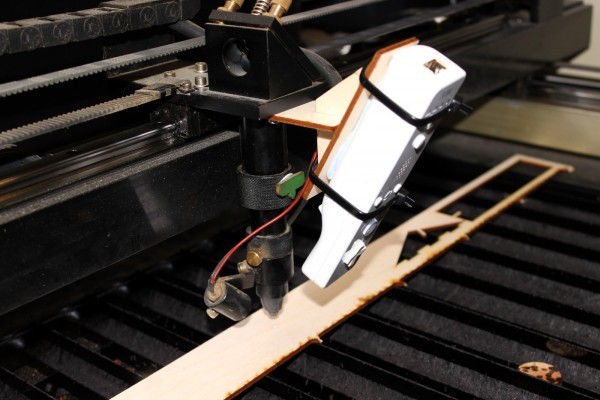 Continuous Autofocus of a laser cutter using a wiimote controller from Martin Raynsford, he writes:

We were inspired by the Glowforge laser cutters ability to continuously autofocus it’s z axis. A camera mounted in the head of the laser detects a laser dot being shone onto the surface of the material and from there it can determine how far the lens needs to be adjusted to set the focal height for the correct cutting distance.
The Nintendo Wii Remote has an optical camera in it that is used to detect up to four points of infrared light. The hardware automatically identifies these points and feeds back XY positions through a bluetooth connection. The cutting laser on a laser cutter is an infrared beam, as it cuts through the surface of the material there is a moment where it is reflected off the material and the Wiimote is able to detect the location of the cut. The location data is fed back to a laptop and by comparing this point against the initial ‘in focus’ point we’re able to detect if the Z axis needs to move up or down and by how much. The laptop sends data to an arduino that is connected between the laser cutters onboard Leetro controller and the Z axis stepper motor driver. The Arduino controller is the same as we have used on previous projects to control the Z axis. The result is a laser cutter that has the ability to remain in focus throughout the duration of a cut.