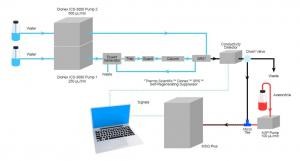 Fluoroacetate (FA, compound 1080) is a strong metabolic poison commonly used as a rodenticide and predacide.1 Fluoroacetic acid is also an intermediate metabolite of many compounds, such as anticancer drugs 5-fluorouracil and fluoroethyl nitrosourea. Fluoroacetate is inexpensive, simple to synthesize, tasteless, and highly soluble in water. Due to the high level of toxicity when ingested,2 and no known antidotes, its use has been banned or restricted in many countries. The United States Environmental Protection Agency (U.S. EPA) has placed sodium fluoroac- etate in Toxicity Category I indicating the highest degree for acute oral toxicity. It is therefore crucial to develop a method for determination of fluoroacetic acid.


Analyses for fluoroacetate have been previously per- formed using several methods, including gas chromatography,3 HPLC,4 and fluoride ion selective electrode.5 Many of these techniques relied upon derivatization prior to analysis6-8 and lacked adequate sensitivity for low-level detection. Use of chromatographic separation with selected ion monitoring (SIM) mass spectrometry (MS) detection affords the opportunity to reliably identify this compound at trace levels in water samples.

This study undertook an investigation to quantify fluoroacetate without prior derivatization or sample pretreatment. An ion chromatography (IC) method was developed with an MS detector. A fortified drinking water matrix was prepared following U.S. EPA guidelines and used to challenge the separation and robustness of the method. Samples of fortified drinking water spiked with the analyte were injected directly. Monitoring the mass-to-charge ratio (m/z) in SIM mode on a single quadrupole instrument allowed for highly sensitive and selective analysis. Method performance parameters such as linearity, calibration range, precision, accuracy, and detection limits were determined.