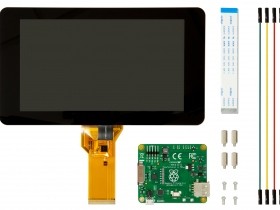 Distributor element14 has a 7-in. Touchscreen Display for the Raspberry Pi, expanding the ecosystem of accessories, to enable users to create all-in-one integrated projects such as turning their Pi into a tablet, infotainment system or embedded project.


Designed by the Raspberry Pi Foundation, the 800 × 480 display connects to the Raspberry Pi’s DSI display connector via an adapter board that handles power and signal conversion. Touchscreen drivers with support for 10-finger touch and an on-screen keyboard will be integrated into the latest Raspbian OS for full functionality without the need for a physical keyboard or mouse.