A Device to create, collaborate music 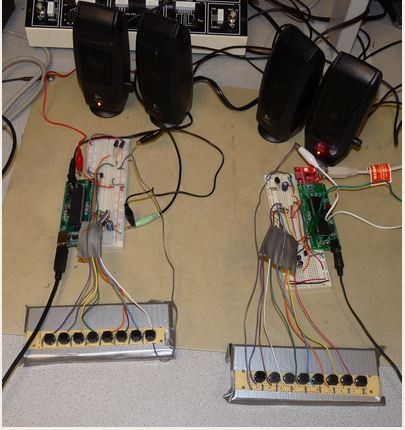 This is a final year project by students of Cornell University which permits companions to learn melodies, make their own particular tunes, and collectively consolidate them. There are basically two pedals each having eight sets of fully customizable buttons and any button can be used to play and MIDI sounds. The device also allows you to record your music in real time and also offer functionality for playback. However, the different feature of this device is its ability to transfer music to your friend which can then merge their melodies with yours. The transmission takes places through a set of IR transmitters and receivers


There is also a teacher mode which allows you to practice playing pre-programmed songs. The prototype uses pulse-width modulation and direct digital synthesis to play back music. Due to high ram requirement, an Atmega 128p was used as the microcontroller since it has the highest ram among the ATmega series of controller. A good point of the project is that IR transmission has been implemented using TCP/IP protocol which makes the transmission and receiving of messages error free. An excellent project done by students of Cornell which one should really try to learn the concepts of modulation, embedded programming as well as networking.