The Technology of the Fuzz Face 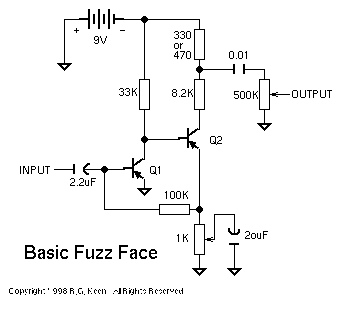 The Fuzz Face remains an enigma today, perhaps three decades after it first hit the market. This simple, two transistor circuit remains for many the very definition of the guitar effects stomp pedal. What makes such a simple circuit the stuff of legend?
Let’s look at the circuit. This is simple almost beyond belief for distortion devices. Two transistors, four resistors, three capacitors, and two controls make all that tone. The first transistor is set up with the simplest of arrangements – input through a DC blocking capacitor directly to the base, emitter grounded, and a single collector resistor; the driven load is a second transistor base, directly coupled. Ordinarily this would be the maximum possible gain arrangement, except that there is that resistor coming from the second transistor’s emitter – what’s that do?

The Voltage Feedback (VF) circuit has the properties that it offers the potential for the highest possible gain from any given transistor – good for a distortion device. It also has a very low input impedance, which means that it heavily loads anything trying to drive it. This will be an important point later. Finally, it can’t really hard saturate like many other transistor hookups. When driven with a large signal on the base, the collector voltage moves toward the emitter. This lowers the bias voltage through the 100K biasing resistor, and steals some of the input signal. Saturation is mushy – again, very good for a musical sounding device.

Was this intentional on the part of the designer? Probably not. It’s likely it was a happy accident, as the VF circuit was common in the early days of circuit design to wring more gain from poor transistors.

The voltage swing in the other direction, when the input is trying to turn the first transistor off, is not as constrained as the swing towards saturation. Fuzz Faces naturally tend to bias with only about half a volt on the collector of the first transistor, so there is a lot of room upwards. The input stage will first hit mushy saturation on one polarity of signal and then if driven hard enough, hit cutoff on the other polarity. The Fuzz Face has asymetrical clipping designed into it!

The gain of the second stage is approximately determined by the ratio of the AC load in the collector to the AC load on the emitter. The AC collector load is just the sum of the collector resistors, and the emitter load to AC is the portion of the 1K pot not “shorted” to ground through the 20uF capacitor. So the gain can vary from a low of about 8 to as high as the transistor’s basic internal gain when the pot is maxxed out. There is a secondary effect in that the AC gain of the FIRST stage is also set by the AC feedback from that pot through the 100K resistor, so when the control is turned full down, the feedback reduces the first stage’s gain most. As the control is turned up more, less AC is fed back to the input, so the effective gain goes up.

As the second stage is driven harder, it can hard clip in cutoff on the same polarity that the first stage clipped softly on, so the clipping begins softly for smaller signals (and gains) and then transistions to hard clipping with harder playing – the thing gets touch sensitivity!

The split collector load resistor of the second transistor acts like a volume pot permanently set to a low value. This is because the power supply is effectively at AC ground because of the low AC impedance of the battery. Incidentally, this is why the FF sounds different with different batteries and with the same battery as it gets run down – the impedance of the battery can change the effective value of the smaller resistor by an significant amount.


The amount of signal tapped off at the junction of the two resistors is deliberately small, not much larger than the input signal to keep the (relatively!) huge amount of signal available from overdriving the input of the amp following it. The output volume control is an entirely ordinary volume pot. The output capacitor blocks the DC level from saturating any device following the Fuzz Face, as well as determining the lowest frequency that gets out. Making this cap bigger will let more low frequencies out.

The value of the output level control has been the subject of some debate. Eric Johnson supposedly favors 100K over the stock 500K. This could have some effect, as the 100K acts as a load on the collector resistor. More importantly, it cuts more lows out by it’s interaction with the output coupling cap, and is less subject to stray capacitive loading cutting highs than the 500K; a 100K should sound somewhat brighter.

What sounds good in there?
We’ve just hand waved the transistors as being there; there is a whole mythology that has grown up around those transistors. The earliest FF’s were made with AC128’s, a common Euro type at the time the FF was designed. It seems likely that the AC 128 was picked for it’s cost and availability (in retrospect) rather than any super sound qualities.

It’s hard to remember for people who were not into electronics 30 years ago, but transistors were not all that good or reliable. The tech community went to silicon for transistors because germanium is prone to leaking (can’t turn the thing off!) and heat damage (solder too long and it dies). Silicon is much better about both of these things, and modern processes turn out closely clustered gains and very high frequency responses routinely.

The fact is that the AC128 is not a super high quality transistor, and wasn’t at the time. It is a moderate gain (90 typical) device with only modest frequency response. It was HIGHLY variable in gain. I have measured several hundred AC128’s for gain, and they vary from a gain of 16 to probably 180. I say probably because the measured gains actually turn in numbers up to 500 or so, which are clearly leaky devices, not high gain devices. The semiconductor industry was new back then, and had not developed the technologies that let us make cheap, reliable, identical-as-peas-in-a-pod devices like we have become accustomed to.

The variation in gain is important because it is crucial to the tone of the FF. Reliable reports from people who actually bought and sold volumes of FF’s in the “golden years” say that out of a case of fifty units, they all distorted all right, but only a few would sound really good, right out of the box. It was common for guitarists to make deals to presort a batch to get a good one. This practice continues today, with Eric Johnson’s tech supporters tracking down and interviewing FF’s to find the few “magic” ones. Fuzz Faces per se do not necessarily sound good without tweaking and transistor selection.

We can understand this today. I’ve done a lot of circuit simulation on the FF, twiddling the values of the transistor gains, and looking at the clipping waveforms and resulting harmonic spectra. There is a definite sweet spot for musical sounding clipping at transistor gains of about 80-110. If you allow combinations of one high and one low gain device, the range widens out to 70 or so on the low end and perhaps 130 on the high end. Keeping in mind that preferences for distortion tone are definitely a matter of personal taste, the range of gains for unselected AC128’s in this circuit would produce some really clunky-sounding devices.

This seems to be borne out in practice. Mike Fuller, maker of the Fulltone “69” pedal, posted his preferences for Fuzz Face transistor gain to the usenet news groups, and they fall right in this range. He noted that he feels that he can affect the relative amount of symetrical versus asymetrical distortion by selecting for non-identical gains in the two positions. (Mike also prefers transistors with only certain colored epoxy sealant, which I can’t see making any difference except coincidentally, but then, who knows?)

The frequency response of the transistors matters, too. The AC128 originals were not particularly stellar; this also turns out to be a happy combination, as we now know that clipping with razor edges sounds — well, like listening to razor blades. Most guitarists (there’s that personal preference thing again) seem to want the rough edges smoothed off. At highest gain, any amplifier exhibits frequency response limited by the device characteristics. The AC128 has parasitic capacitances typical for then-current germanium devices, meaning that it was working hard to do the full audio range. This almost certainly has something to do with the softened edges of the sound. In simulation, I could play with the parasitic capacitances of the simulated devices, and found that adding high junction capacitances from collector to base made for softer distortion. The lesson here is that you can soften the sound of a FF even further by connecting a 10-100pF capacitor from the collector to base of the transistors. This dodge was used in later silicon versions of the FF.