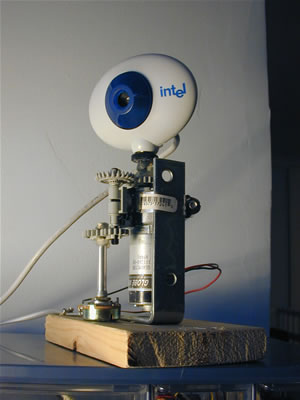 You will need to build two of the parallel port portion of the schematic. For the second, reverse the connection to the motor so the motor will turn in the opposite direction. This way when one relay is on, the motor turns one direction, and when the other is on, the motor turns in the opposite direction. Though, you can build a maximum of 8 replications of the above circuit to be controlled by the 8 output pins of the Printer/Parallel Port. Solder the circuit’s Parallel Port Inputs to the corresponding data out pins.


I built the motor system using a 24VDC gearmotor operating at 5V (to get a slower speed, and yes, the motor is overkill). I mounted the motor on a piece of wood with an L bracket and small pipe clamp. For feedback to know the direction of the webcam I used a 100K linear potentiometer rigged up to the motor’s shaft using Lego Technic gears. I drilled out the axles to fit the shaft of the motor and rod of the potentiometer. Hot glue held it all together. Using a 1:2 gear ratio (where the potentiometer spins at 1/2 the speed of the motor shaft) gives a good, near-360 degree radius. Tip for gluing on metal: just hot gluing on a smooth metal surface does not stick very well, so rough up the metal with sandpaper a bit or use some other kind of glue.