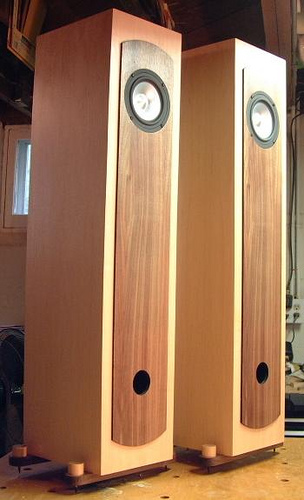 The loudspeakers are based around the very well regarded Jordan JX92S Fullrange drivers. The enclosure is a simple ported bass reflex type with a volume of about 1.3 cubic feet. The speaker box is constructed out of Baltic birch plywood and finished with maple and walnut veneer and tung oil.
The Jordan JX92S fullrange driver is used to make a tower loudspeaker. The enclosure in a large (1.3 ft3) vented (bass reflex) speaker box. This speaker system is well suited for medium to large sized room with medium powered amplification (more than 10W). The JX92S driver has good power handling (50W RMS) and a large Xmax of only 9 mm, so it can develop moderate SPL. The Jordan JX92S is a very well regarded fullrange driver which is known for it’s smooth frequency response and it’s ability to deliver much more bass than any similar sized fullrange driver.