Mechanized Interface for Robots and Computers 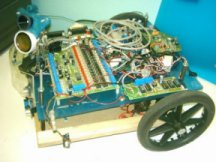 This project aimed to develop a modular system for interfacing already commonly available hardware for conducting household or industrial tasks, with standard computers. Ultimately, it was designed to link to an already established infrastructure to develop new and more effective ways of utilising it.
The aim of this project was to create a prototype MIRC to show how a PC based robot could be developed. The objective was to produce a basic model with four wheels, standard sensors and a web cam forming the centre around which an individual could create their own custom robot with extra USB devices.
It was intended that the structure of the robot should be simple to facilitate easy adaptation and upgrading. The housing was designed to create three distinct layers within the MIRC to separate elements of the robot, thus leaving room to add more devices and a laptop computer when complete. The bottom layer would be designed for battery housing and mechanical hardware, such as wheels and sprockets, the middle layer to contain the main interface electronics, and the top layer to be for the external devices.
The MIRC was developed over a period of eight months. Initially research was conducted into robotic control systems, pc interfaces, sensors and actuators. A K8000 interface board formed the basis of the project, as it allowed for the connection of analogue sensors and actuators to the pc. The PC was chosen rather than built in micro processor because it was far more powerful and customisable.


The body of the MIRC consists of three layers. The bottom layer is for the drive mechanics and batteries, the middle layer is for the interface electronics and the top layer for the computer and room for expansion. The base was initially made from an aluminium sheet with aluminium shelving brackets along the sides for strength. This eventually had to be changed as the original base did not prove sturdy once the heavy batteries were added. Rapid acceleration and turning caused the whole base to flex, which eventually caused the chains between the motors and wheels to slip, and one of the gearboxes to break. This was one of the main obstacles that was overcome as it slowed progress and wasted funds. The new base is made from a piece of thick MDF with wooden supports for the bearings, and performs much more effectively.