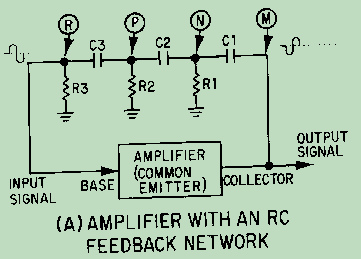 Modern wave generators use many different circuits and generate such outputs as SINUSOIDAL, SQUARE, RECTANGULAR, SAWTOOTH, and TRAPEZOIDAL waveshapes. These waveshapes serve many useful purposes in the electronic circuits you will be studying.
One type of wave generator is known as an OSCILLATOR. An oscillator can be regarded as an amplifier which provides its own input signal. Oscillators are classified according to the waveshapes they produce and the requirements needed for them to produce oscillations.

Wave generators can be classified into two broad categories according to their output waveshapes, SINUSOIDAL and NONSINUSOIDAL.

A sinusoidal oscillator produces a sine-wave output signal. Ideally, the output signal is of constant amplitude with no variation in frequency. Actually, something less than this is usually obtained. The degree to which the ideal is approached depends upon such factors as class of amplifier operation, amplifier characteristics, frequency stability, and amplitude stability.

Sine-wave generators produce signals ranging from low audio frequencies to ultrahigh radio and microwave frequencies. Many low-frequency generators use resistors and capacitors to form their frequency-determining networks and are referred to as RC OSCILLATORS. They are widely used in the audio-frequency range.

Another type of sine-wave generator uses inductors and capacitors for its frequency-determining network. This type is known as the LC OSCILLATOR. LC oscillators, which use tank circuits, are commonly used for the higher radio frequencies. They are not suitable for use as extremely low-frequency oscillators because the inductors and capacitors would be large in size, heavy, and costly to manufacture.


A third type of sine-wave generator is the CRYSTAL-CONTROLLED OSCILLATOR.

The crystal-controlled oscillator provides excellent frequency stability and is used from the middle of the audio range through the radio frequency range.

Nonsinusoidal oscillators generate complex waveforms, such as square, rectangular, trigger, sawtooth, or trapezoidal. Because their outputs are generally characterized by a sudden change, or relaxation, they are often referred to as RELAXATION OSCILLATORS. The signal frequency of these oscillators is usually governed by the charge or discharge time of a capacitor in series with a resistor. Some types, however, contain inductors that affect the output frequency. Thus, like sinusoidal oscillators, both RC and LC networks are used for determining the frequency of oscillation. Within this category of nonsinusoidal oscillators are MULTIVIBRATORS, BLOCKING OSCILLATORS, SAWTOOTH GENERATORS, and TRAPEZOIDAL GENERATORS.

An oscillator can be thought of as an amplifier that provides itself (through feedback) with an input signal. By definition, it is a nonrotating device for producing alternating current, the output frequency of which is determined by the characteristics of the device. The primary purpose of an oscillator is to generate a given waveform at a constant peak amplitude and specific frequency and to maintain this waveform within certain limits of amplitude and frequency.