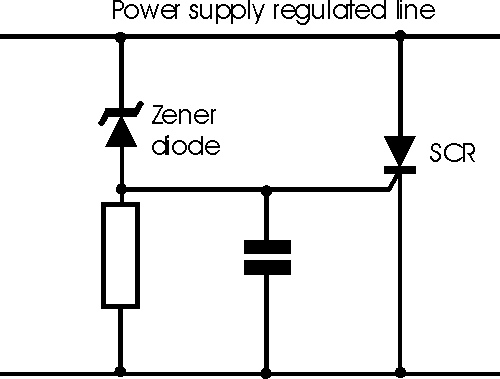 Power supplies are normally reliable, but if they fail then they can cause significant damage to the circuitry they supply on some occasions. The SCR overvoltage crowbar protection circuit described provides a very simple but effective method of protecting against the certain types of power supply failure.
In most analogue power supply arrangements a control voltage is fed into a series regulating device such as a transistor. This controls the current and hence the output voltage. Typically the input voltage to this may be well in excess of the output voltage. If the series regulator transistor in the power supply fails and goes short circuit, then the full input voltage will appear on the circuitry that is being supplied and significant damage may result. To overcome this SCR over voltage crowbar circuits are widely used. These overvoltage protection circuits are easy to design, simple to construct and may prevent significant levels of damage in the unlikely event of a power supply failure.

By looking at the voltages involved it is very easy to see why the inclusion of overvoltage protection is so important. A typical supply may provide 5 volts stabilised to logic circuitry. To provide sufficient input voltage to give adequate stabilisation, ripple rejection and the like, the input to the power supply regulator may be in the region of 10 to 15 volts. Even 10 volts would be sufficient to destroy many chips used today, particularly the more expensive and complicated ones. Accordingly preventing this is of great importance.

he SCR over voltage crowbar or protection circuit is connected between the output of the power supply and ground. The zener diode voltage is chosen to be slightly above that of the output rail. Typically a 5 volt rail may run with a 6.2 volt zener diode. When the zener diode voltage is reached, current will flow through the zener and trigger the silicon controlled rectifier or thyristor. This will then provide a short circuit to ground, thereby protecting the circuitry that is being supplied form any damage.

As a silicon controlled recifier, SCR, or thyristor is able to carry a relatively high current – even quite average devices can conduct five amps and short current peaks of may be 50 and more amps, cheap devices can provide a very good level of protection for small cost. Also voltage across the SCR will be low, typically only a volt when it has fired and as a result the heat sinking is not a problem.


However it is necessary to ensure that the power supply has some form of current limiting. Often a fuse is ideal because the SCR will be able to clamp the voltage for long enough for it to blow.

The small resistor, often around 100 ohms from the gate of the thyristor or SCR to ground is required so that the zener can supply a reasonable current when it turns on. It also clamps the gate voltage at ground potential until the zener turns on. The capacitor is present to ensure that short spikes to not trigger the circuit. Some optimisation may be required in choosing the correct value although 0.1 microfarads is a good starting point.

Although this power supply overvoltage protection circuit is widely used, it does have some limitations. Most of these are associated with the zener diode. The zener diode is not adjustable, and these diodes come with at best a 5% tolerance. In addition to this the firing voltage must be sufficiently far above the nominal power supply output voltage to ensure that any spikes that may appear on the line do not fire the circuit. When taking into account all the tolerances and margins the guaranteed voltage at which the circuit may fire can be 20 – 40% above the nominal dependent upon the voltage of the power supply. The lower the voltage the greater the margins needed. Often on a 5 volt supply there can be difficulty designing it so that the overvoltage crowbar fires below 7 volts where damage may be caused to circuits being protected.

It is also necessary to ensure that there is some means of limiting the current should the overvoltage crowbar circuit fire. If not then further damage may be caused to the power supply itself. Often a fuse may be employed in the circuit. In some circuits a fuse is introduced prior to the series regulator transistor, and the SCR anode connected to the junction node where the output of the fuse is connected to the input of the series regulator. This ensures that the fuse will blow swiftly.

Despite its drawbacks this is still a very useful circuit which can be used in a variety of areas.