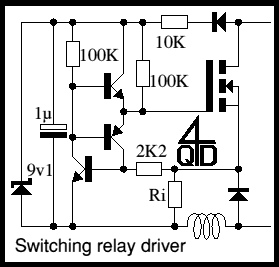 It operates by PWM – well, actually by PFM – Pulse Frequency Modulation. At power up, C1 charges up via D1 and R1. R2 will conduct, pulling the base of the emitter follower, Tr2, up and feeding gate voltage to the MOSFET.
Tr4. Clearly the circuits in an analogue region during power-up, but as this is intended for use on a high voltage supply, power-up is pretty quick.

As Tr4 conducts, current is fed through R5 and the coil of the Solenoid. The current builds up, until the voltage across R5 becomes high enough to turn on Tr1.

Tr1 and Tr3 are a complementary feedback pair, so when Tr1 conducts, they turn each other on in a snap action switch and the MOSFET gate gets turned hard off.

The current in the solenoid coil is forced (by the inductance) to keep flowing. It does so via D3 and R4.

When there is insufficient current to keep Tr1 conducting, it turns off and the gate is again pulled high by R5 and Tr2, turning the MOSFET on. It slams the supply voltage across the relay coil, building up the current. Clearly the rate of current build-up will depend on the supply voltage, so at low voltages, the MOSFET turns on for a longer time and at high voltages, a shorter time.

The time during which the MOSFET is off is dependant on the relay coil and is constant, whilst the on time varies, altering the frequency.