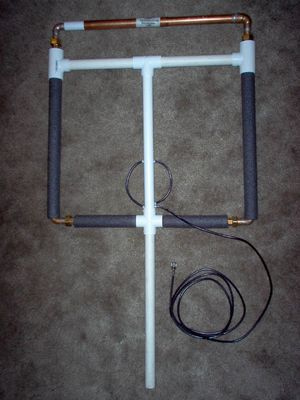 This tunable magnetic loop antenna disassembles into small but rugged pieces and can be tuned from 14 MHz to 30 MHz.
For those unfamiliar with magnetic loop antennas, the principle behind them is simple. A small conducting loop (often on the order of 1/10 wavelength) is broken and a capacitor bridges the gap. The loop’s inductance, combined with the added capacitance, forms a high-Q tank circuit. A coupling loop or other matching network delivers power from a transmitter, exciting the tank circuit at its resonant frequency. By changing the capacitance, the antenna can be tuned over a fairly broad range of frequencies.