LED switch for light and fans 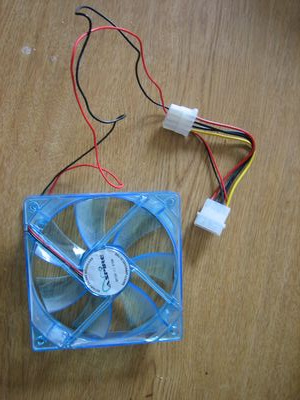 Putting a small light switch on the LEDs lets me turn the lights off so I can sleep and keep the fans running for my hard drives.
I wanted a way to turn off the LEDs in my Aspire 120mm blue fans without cutting the power to the fans. If you have soldering and wiring experience this will be simple. It does require some soldering in tight corners but very doable nonetheless. Before attempting this please go over the schematic for your particular fan model, I doubt all fans have the same design and circuitry. That being said the basic circuit with my switch in it looks like this:?

*Correction* I received a few comments about back power. Back power can cause unnecessary power consumption and circuit damage. I should have put the switch on the 12+ side before the LEDs this would have fixed that. Thanks to all for the comments, the only way you?re going learn is through mistakes.?

You can see that the LEDs and Fan motor are run in parallel, which makes things very easy. The LEDs are also in parallel, which is a bit of a pain, but that is the most effective design so it makes sense. You need to put a switch in to cut power to the left half of the circuit. This is not as easy as I?ve shown here, however. The ground connections for the LEDs do not link to one central point and therefore must be connected for simplicity.

1. Remove the Sticker ? first things first, remove the sticker on the back that has the main power wires running in. You should see a circular circuit board with four connections on the outer edge for the LEDs.


2. Methodology ? There are two different methods to wiring this up; a clean way and a messy way. I chose the clean way, which is a bit more difficult, so that?s what I will explain here (the messy way is pretty obvious).?

You should notice that there is a plastic backing that covers most of the circuit. What we want to do is feed all the wires under this plastic backing to hide as much of the wiring as we can, to produce a finished product that looks manufactured, or at least not ugly.

3. Feeding and soldering wire # 1? You first want to cut two long lengths of wire of different colors, preferably small gauge wire. I initially used a solid 22 gauge but that proved un manageable so I went with a smaller gauge that was stranded ( I don?t know exactly what size it was because it was given to me for free from a friends garage). Strip the ends, not a lot, just enough where you feel comfortable soldering?

Focus on one LED at a time. Thread one wire under the plastic and position the bare wire tip over the ground connection point for one of the LEDs on the circuit (it will have a wire running to the LED and the one next to it should be labeled as ?+?). Make sure you are not going to join any other connections or touch any other wires, and then solder it in place. Take out as much slack in the wire as you can, running the wire down the main spline that the main power wires are located to the outer edge of the casing. Leave at least an inch or two of wire on the end and cut the remaining wire for the next LED.

Article by Ray and Cape at http://www.elephantstaircase.com/wiki/