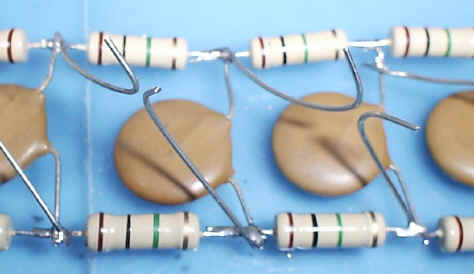 Here is a fun little project that can make big, fat, noisy sparks at least 2 inches long, and can be built very quickly and cheaply.


The capacitors, C, are charged up in parallel via the 1M (one megohm) resistors, so they each become charged to the input voltage. When first (leftmost) spark gaps breaks down (sparks), the voltage across the next increases, causing it to break down, and so on for all the other gaps. When all gaps have broken down, the low impedance of the ionised air in the sparks effectively connects all the charged capacitors in series, multiplying the input voltage by the number of capacitors. The ionised air path has sufficiently low resistance that the charge resistors don’t have any significant effect.

Rb has a ballasting effect. This is needed to avois a continuous arc forming across the first gap after it fires – this prevents further firing. The value will depend on the type of power supply used – values around 1M usually about right. High values will reduce the maximum spark repetition rate, so you may be able to get more ‘bangs per second’ by reducing Rb.

Although it is possible to make a Marx generator with just an array of resistors, capacitors and spark gaps, it can? be hard to make it fire reliably, as it will depend on the breakdown voltage of the spark gaps, and there can be a fine line between not firing and firing before all the capacitors are fully charged. One crude solution is to initate the breakdown of the first gap mechanically, e.g. by waving a (suitably insulated!) screwdriver between the electrodes.
A more elegent approach is to add a trigger circuit, like the one shown above. This consists of a relaxation oscillator to generate high voltage trigger impulses to initiate the spark at the first gap. V is a small xenon flashtube – preferably the linear type (as opposed to the U shaped ones used in larger strobes). Tt is a trigger transformer of the type used on camera flashes and strobes. Rt and Ct determine the operating frequency – typically one pulse every second or two. I used two of the 4.7nF caps for Ct, and five 33M resistors in series for Rt. Note that the xenon tube and trigger transformer are used in the opposite way to their normal application – here the tube breaks down due to the high voltage, discharging Ct into the coil to create the trigger spark. The output wire from Tt (The one that would be connected to the trigger electrode in the original flash application) is placed a couple of mm from the first spark gap, as shown above, so a spark will jump from it when triggered.?? I found that the cheap coil I used tended to die after several minutes’ operation, so something with stronger insulation would be preferable.


Article by Mike at http://www.electricstuff.co.uk