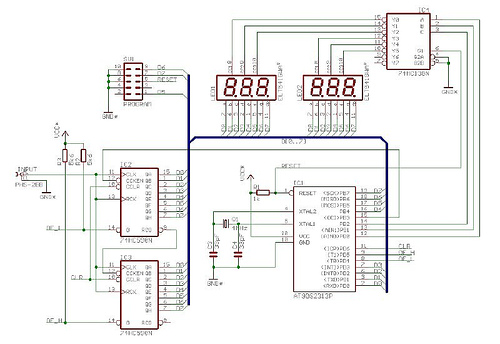 This is another project which fullfills a need. I once built a frequency counter using plain TTL chips. That was long before the CMOS HC versions, even before LS was available.
It could measure up to 50 MHz and worked quite okay, but the TTL chips was extremely power hungry. I think there was about 20-25 TTL chips on that monster.

Well, but the old counter is now somewhere in the shed, and as I now again needed a counter, I did a bit more modern design.

It uses only 4 chips – 3 HC TTL’s and an Atmel At90S2313 microcontroller. It has a 5 digit LED display plus one used as a band indicator. Even with the LED display, the current consumption is less than 50 mA.


It counts up to at least 52 MHz. I couldn’t find any signal source in the lab that could supply more than 52 MHz, so it may go a bit higher, but the fClock(typ) for the HC590 is about 35-40 MHz, so you shouldn’t really count (no pun intended) on more.

I got the idea from an article I saw on the net. I think it was a Circuit Cellar article. I had a look at the code, and it sounded like a quick and simple counter solution. I don’t know what chips it used, as I never saw the schematic, but here’s my implementation :

The schematic is quite straightforward. There are two major parts, the display multiplexing and the counter stage. A 8-bit “databus” is constructed from the lower 4 bits of PORTD and the upper 4 bits of PORTB on the 2313. This peculiar arrangement is necessary, as we need the OC1 output on PB3 for gating the counter stage. The displays are 3-digit 7-segment common-cathode displays. They are multiplexed by supplying the segment data from the databus, and selecting the current digit with a ‘HC138 dataselector, which is controlled by 3 I/O lines from the 2313. The two ‘HC590 counters are counting the input pulses and supplies the count to the 2313 on the databus. Each counter can be read separately using the OE_L and OE_H lines. The counters are cleared using the CLR signal. The counters are gated using the OC1 (Output Compare 1) signal from the 2313. By varying the duration of the gate time, the counter can be made autoranging, and handle a large frequency span.