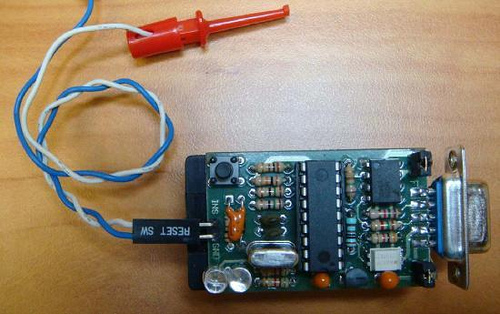 This project was sent by Electrical Engineer Atanasios Melimopoulos.In Circuit-Debuggers, as you may already know, have become the PIC’s debugging standard tool for many programmers because it’s easy use and handy interface to the target picplaced- board. They come with MPLAB plug-ins that provides a full rich set of commands and functions in order to debug your code in real time.
1Bit Interface placed on ANY I/O selected spare pin (or carefully shared). ICD 2bit interface is too much, usually on 12Fxxx 8-pin pics where there are only 6 I/O pins. Also on bigger pics, like 16Fxxx and 18Fxxxx where the RB port is the most useful, the fact that RB6-RB7 are forced to be the 2bit ICD interface, may goes against your hardware I/O connections and sometimes you can’t share their use.
1Bit Interface independent of the target PIC clock speed from 20KHz to 50MHz. ICD 2bit interface communicates to the target pic via serial ASCII link, that’s why the pic clock freq must be close to an integer multiple of the chosen baudrate.
1Bit Interface independent of the target PIC type (12Fxxx, 16Fxxx, 18Fxxxx) ICD commands and features are based on some bootstrap routines that Microchip places on most of its MPU types. But depending of the devices class, family and generation, this routines differs and so the ICD implementation of this functions.