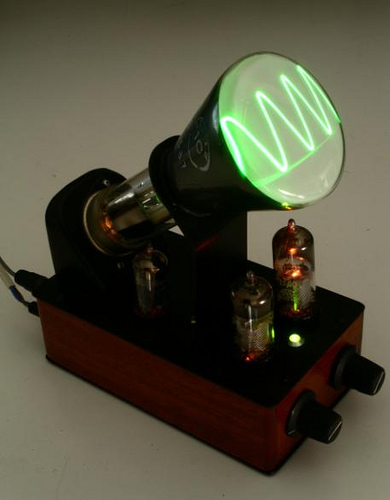 A fully-functional toy oscilloscope, made out of parts that the author found in his junk box, such as the EF91, EF80 and EF184 valves. Using a DC-DC converter to power the old 7cm CRT he discovered in his loft, he housed it in the same wooden box as the rest of the circuitry. The whole system runs from a single regulated 12.6V DC supply, which can be derived from a “wall-wart” PSU.
Toy oscilloscope circuit schematic
It uses three different small-signal rf pentodes – an EF91 in the timebase circuit, an EF184 in the Y amplifier, and an EF80 in the X amplifier.

The choice of tubes is somewhat arbitrary. The EF91 would be very suitable in all three functions, since among small-signal pentodes, it is unusual in having suitable characteristics for providing a relatively large anode voltage swing with little distortion. But I do not find the EF91 visually attractive, so I opted for the other tubes in the main functions, relegating the ’91 to the back of the chassis, where its smaller size fits in nicely.


The EF184 has high transconductance, so is used in the Y amplifier where large voltage gain is required, while the EF80 is used with cathode-degeneration feedback in the X amplifier which requires much less gain, but a larger voltage output with good linearity.

These two valves run from an HT supply of 600v in order to achieve linear amplification over a wide output voltage range (400v pk-pk for the X amplifier, 220vpk-pk for the Y amplifier), but they operate within the permitted maximum anode voltage for both tubes of 550V. The large output voltage swings are a consequence of the low deflection plate sensitivity of the DG7-6 cathode ray tube. Variable cathode resistors are used in both amplifiers so that the operating points of the tubes can be set for best large-signal linearity.