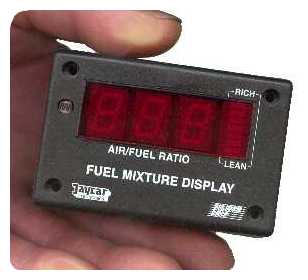 An introduction to the Wideband Fuel Mixture Display (FMD). This document describes how the 5300/5301 display works with the DIY-WB unit.
The three regions of operation are shown at right. A normal operating value (of 14.7 in this case) is shown as three digits. A rich condition is shown as 10. followed by an equals or less than symbol (=<). A lean condition is shown as 25. followed by a greater than or equals symbol (>=). Note: display is operating in dot mode.

Other software changes are to:


Make more efficient use of table space to allow the addition of the Lambda display mode.
Redesign for more modularity for possible future upgrades.
Version and mode information displayed on startup.
Better calibration capability for DIY-WB output range.
The major changes have to do with how the dot and bar mode display intervals have been altered.

Dot mode displays 48 unique LED configurations with a difference of 0.2 AFR between steps, from 10.0 to 19.6 AFR. Either one single LED is fully lit, or two LEDs are lit with a varying intensity, giving the impression the LEDs move slowly upwards as the display shows a richer mixture. The single centre LED is lit for AFRs between 14.6 and 14.7.