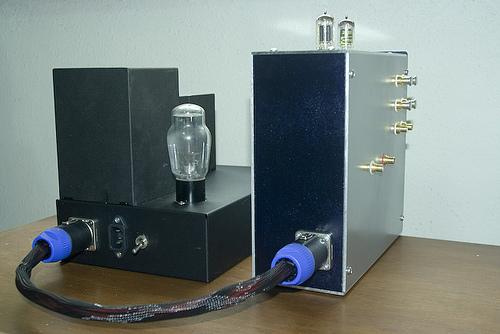 This 5687 preamp uses LED biasing and Tamura A4714 output transformers. The preamplifier uses the double section of a 5687 tube for each channel, with each section using it’s own grid stopper 220R and it has own pair of green LED for a 4V bias.
The double section is used so as to lower the effective tube impedance, resulting in better compatibility with the Tamura A4717 5k output transformers.The 5687 tubes are operated at 115V, -4V and 25mA, which is one of the more linear regions for a 5687. Initially, I tried AC for the filaments and the result was far too much hum, so DC is used for the heaters.

Power Supply The power supply uses one RCA-83 mercury rectifier. An Omron timer is used to delay the B+ in order to allow the rectifier to warm up. The last 2 RC sections (3k6, 220uF, 3k9, 10uF) are separate for each channel The 10uF capacitor is polystyrene. The RCA-83 rectifier uses 5VAC for the filaments. The heaters for the 5687 tubes are provided from a full bridge of MUR860 diodes, followed by 5 x 10,000uF Elna caps. 830mA of current regulation is supplied using a LM317 regulator and a 1R5 resistor between ADJ and VOUT pins. Votlage to the tubes is about 11.5V.