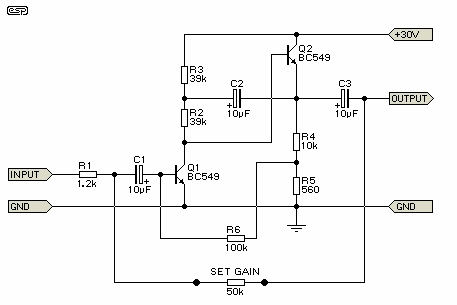 This is a design for a low noise microphone preamplifier, which is ideally suited to low impedance microphones. One limitation is that it is not balanced, which is not a problem in a home recording environment, but will allow the mic lead to pick up noise with long cable runs or in a hostile environment.
As shown, it is not really suitable for professional work (although it has been used on stage in its unbalanced form with good results), but the addition of a 1:1 microphone transformer on the input will convert it into a balanced preamp with very high performance. In many cases, a transformer will actually outperform active balancing circuits, because there is (or should be) no ground reference. The shield of the balanced cable must be earthed of course, but in my experience with live music and studio work, less noise is picked up if the internal wiring is floating.

It is most regrettable that good mic transformers are rather hard to come by, and are expensive. If you happen to have a suitable one in your junk box, give it a try with this circuit – I doubt that you will be disappointed with the result. I have used this circuit in Front-of-House, foldback (monitor) and studio mixers, and managed to obtain excellent results – I still have a little 6 channel mixer (which I use only occasionally now) using this circuit, and have never been even slightly tempted to replace it with even the best of opamps (or Figure 3 for that matter).

It requires a well regulated (or extremely well smoothed) supply voltage of 30V, and will typically be able to supply a maximum output level of around 7V RMS allowing for typical component spreads. With the component values shown, impedance matching is correct for a 600 Ohm mic, and the gain is about 40. Note that this is far too high to use with any microphone for close-miked vocals or instrument amplifiers, but is suitable for normal speech.

By making the SET GAIN resistor a 50k linear pot, the gain can be varied from virtually 0 up to a maximum of 40 (32dB), with low noise and distortion at all settings. The output level from a well known brand of vocal mic has been measured at over 1 Volt peak-to-peak with loud singers, so the “conventional wisdom” of mics having low output is clearly wrong. For this reason, making the preamp with variable gain is almost an essential requirement.

The open-loop gain of this little circuit is about 3,400 – this is obtained by disconnecting the feedback resistor, and bypassing R5 with a suitably large value capacitor. All this from a single amplifying transistor !


Measurements taken when I was building lots of these show that the equivalent input noise was about -127dBm, so with a gain of 40dB, signal to noise ratio should be about 87dB relative to an output of 0dBm (approx 775mV). This is completely unattainable in practice, because of the noise from the microphone itself as well as other extraneous noises which cannot be eliminated.

Needless to say, the use of metal film resistors is a must to get the best possible noise performance. I’m not completely happy with the requirement for electrolytic capacitors, but for the impedances involved relatively large value caps are a must. Use of Low Leakage electros may be worth the effort, but I have not experimented with this option. I have used solid “tag” tanalum caps in this circuit, but they are (or were) revoltingly unreliable and I stopped using them after it was necessary to change every tantalum cap in a batch of about 20 small 8 channel stage mixers. I was not impressed !

This is a very quiet preamplifier, but is only suited to low impedance inputs – the noise figure degrades rapidly as the input impedance is increased. The design – in particular the collector current for Q1 – was based on the noise / current / impedance graphs for the Philips version of the BC549 – minor variations are likely with different transistors, or BC549 devices from other manufacturers.

The entire circuit is naturally Class-A, and with a gain of 32dB, has an output impedance of less than 100 Ohms. The recommended load impedance is 22k or greater, so it is quite capable of driving a set of tone controls or a fader. Buffering with a good quality opamp will naturally reduce output impedance (and also increases output drive capability and open-loop gain) as shown in the example in Figure 2.

The exact same design has also been used as a virtual earth mixer for the mix bus in mixers from 6 to 24 channels. The only change is to remove the 1k2 resistor at the input, and connect the mix bus directly. The optimum impedance must be retained for low noise, so for a 10 channel mixer, each channel should have an output resistance of 12k to 20k to the bus. Fewer channels require lower resistance and vice versa.