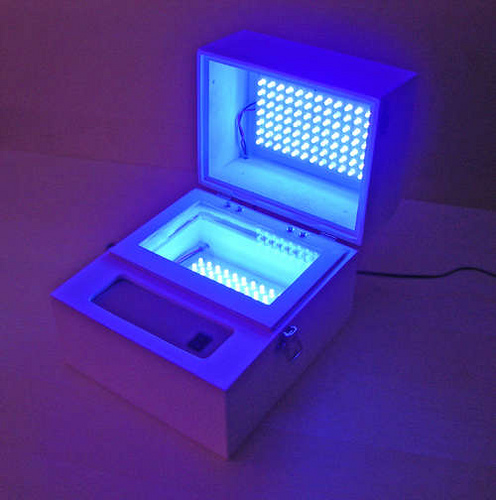 A UV exposure box is an extremely useful piece of kit. It can be used to make proper PCBs. It can also be used to make other things such as intricate photo etched parts,a subject for another instructable. The trouble is they can be a little pricey for the hobby enthusiast especially if you want the double side type
This instructable outlines the construction of a double sided UV exposure box using the recent generation of high brightness UV LEDs
LEDs are far more energy efficient than either incandescent or fluorescent lamps offering between 5-10 times more efficiency making them cheaper to run and kinder to the environment. They also (unlike fluorescent tubes) do not contain mercury. LEDs have a far greater life span than the other types of lamp measured in decades rather than months. The frequencies being emitted are also in a tighter band making UV LEDs safer than the traditional UV tubes. There’s also just something cool about LEDs, you can’t put your finger on it, but ever since It was a kid found them to be one of the more fascinating electronic component


Is there a disadvantage to using LEDs?
Not really, however the UV exposure box you have detailed here is a little less powerful than the commercially available ones. This means that your exposure times will be around 2 ~ 3 minutes as opposed to 30 ~ 40 seconds, but come on, do you really need your PCB’s to be produced that quickly? Anyway sometimes having a slightly slower exposure time can be an advantage allowing you a little more control