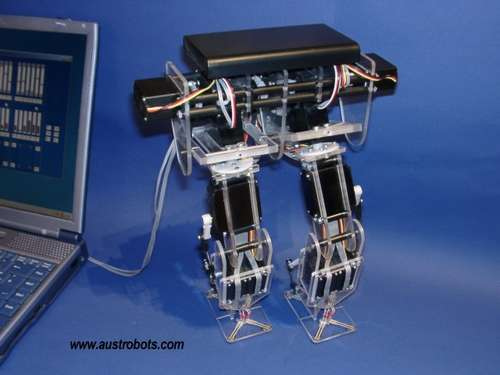 The BiPed robot V-3 was designed to get as close to the freedom of movement of the human lower body, it has 12 degrees of freedom. The frame is made of acryl-sheets and model servos are used as actuators
For now the robot is controlled via PC, autonomous behaviour when development finished. The software allows to generate motion-patterns, replay them and view actual sensor data

Used sensors are a two-axis accelerometer for the orientation of the hip and four force-sensing resistors at the bottom of each footplate. A kind of torque feedback of the servos is realized by measuring the driving signal of the servo motor


The actuators integrated in the framework are servos used in RC-modeling. In general one servo is responsible for one degree of freedom. For a better mechanical stability two servos (at the top) are combined for lifting each leg. The servos actuating the footplate are working parallel

Two types of ATMEL AVR controllers are used in the actual version, one mega8 as master and three tiny26 for servo-controlling, force-sensing resistor measurement and TFB-feedback. The master handles the data-transfer for each ÂµC via I2C bus and the communication to the PC is realized as simple RS232 communication.