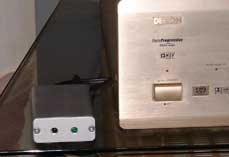 This circuit is used to relay signals from an Infra Red remote control in one room to an IR controlled appliance in another room.As previously stated IR remote controls use wavelengths between 850 – 950nm. At this short wavelength, the light is invisible to the human eye, but a domestic camcorder can actually view this portion of the electromagnetic spectrum. Viewed with a camcorder, an IR LED appears to change brightness.
Parts List
1 SFH2030 Photodiode
1 TIL38 IR emitting diode
1 5mm Red LED
2 4.7M 1/4W resistors
1 1k 1/4W resistor
1 2.2k 1/4W resistor
1 27ohm 1/2W resistor
1 BC337 transistor
1 CA3140 MOSFET opamp
The CA31340


The reception range of the IR remote control to the photodiode depends on the strength of the remote control, but I had a working range of a meter or so, this needs bearing in mind when placing the circuit. Its also a good idea to wire LED1, the coloured LED near to the photodiode, that way, you know that the unit has received a signal. The IR emitter has a larger range, I had no problems at 5 meters but may possibly work further distances. The emitting diodes are quite directional, so make sure it is aimed directly at the appliance to be controlled. The IR emitting diode is small and can be placed out of sight. I drilled a small hole above the door frame. The emitter diode leads were insulated and pushed through this hole, leaving an inch or so to adjust the angle and position of the LED. From a distance, the clear plastic lens of the diode could not be seen.