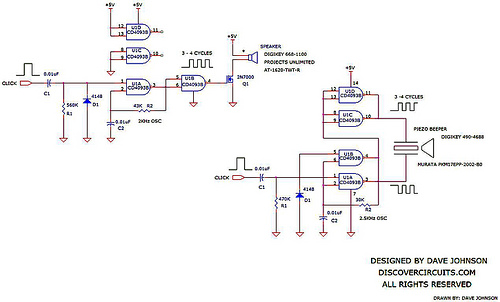 Often in computer controlled systems, you would like to generate a click sound whenever a button is pressed. This provides the user with audible feedback that the pushbutton press has been acknowledged. The two circuits below generate such a sound. A click sound is generated each time the logic input swings from a logic low to high condition.
David has two different click generator versions. One circuit uses a piezoelectric type beeper and draws very little power. The second uses a miniature speaker, which can be powered from a voltage ranging from 5v to 12v and can generate a louder sound. Both circuits produce the click sound by gating a short 3 to 4 cycle burst of a 2KHz to 2.5KHz oscillator to the sound generating device. In the future he will show how this circuit can be handy in giving a user a sensor level indication by the controlling the number of clicks per second. The old Geiger counter is one example where clicks are used this way. In that case, the click rate provided the user with an idea of the level of radiation.