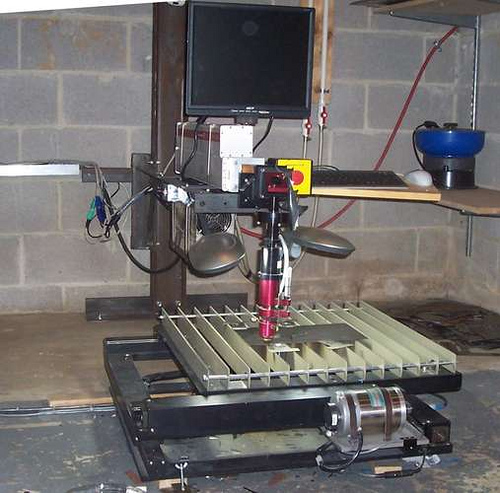 The general idea of this CO2 laser system is that a beam is directed down to a part for cutting. The part sits on a computer controlled platform which moves the piece around the stationary laser beam. Cutting is acheived by passing the beam through a focusing lens. A focused beam exits through the bottom of a cutting head nozzle. Gas, such as oxygen, is fed into the side of the chamber below the focusing lens. This gas exits the nozzle along with the beam and the laser beam or oxygen combination serves to vaporize the steel for cutting.
This be that laser. My system is based the Coherent G-100, an RF excited sealed industrial C02 pulsed laser. It consists of 100 watt laser resonator and solid state RF amplifier integrated into an all aluminum enclosure. The RF amplifier provides pulsed RF power to the laser to ionize the CO2 gas mixture in the tube. A modulation signal applied to the laser head controls the output pulse width and period. The amplifier produces 3000 watts of RF power.
Robotic CNC Table has a total of 18 inch movement in X and Y directions. The lead screws have a .25inch pitch. The motors that came with the table were too old to be used, and some new servos were retrofitted.
The laser has a cnc table that moves parts around a stationary beam source.
Then prepare the Laser Controller.