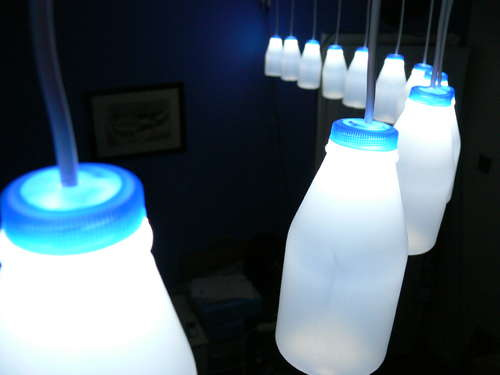 Make milk bottles into good looking LED lights, and use an Arduino to control them. This recycles a number of things, mainly the milk bottles, and uses a very low amount of power: the LEDs apparently dissipate less than 3 watts but are bright enough to see by.
First of all, we’re going to cut some perspex discs to go inside the caps on the milk bottles, then drill holes through which we can mount the LEDs and cable. Now, pop the LEDs through the holes, being careful to observe polarity. We’re basically going to daisy chain them, with each negative leg on one LED connecting to the positive leg on the next. First of all, solder all your pairs of twisted leads together, then clip off the excess. Next, strip lengths of electrical cable then thread them through the cable holes you drilled into each disc. Wrap the cables around the LED leads, with live (brown) going to the long (positive) lead of the LED string. Coil the copper around the leads, solder it in place, and again snip off any excess lead. At this point you have a set of lights mounted in milk bottle caps and designed to run with a particular power supply.You could now connect the lights up with a simple switch box. Use a standard Arduino for prototyping and making sure that could code what you want to.Transistors allow me to use a smaller current to switch on and off a much larger one, without frying the Arduino. Since the lights run from a 12v supply, there needs to be a voltage regulator dropping it to 5v for the arduino. Enter the LM317T, which gives an output voltage depending on the resistors you augment it with. The difference between the input and the output is shed as heat, so sometimes these ICs need a heatsink. Cut and strip 12 cables to solder to the resistors on the base pins of the transistors. These will be the cables that the arduino uses to talk to the transistors. Then do the programming. Then build the switch box.