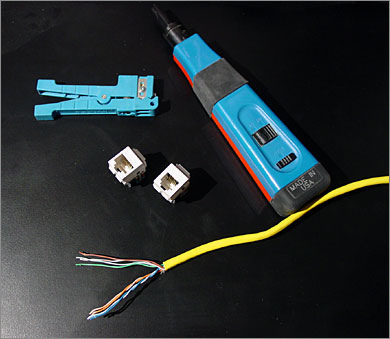 This will show you how you can take a single Cat5e cable and turn it into both an ethernet jack capable of 10/100Mbps and a two line phone jack.
I don’t know why builders cut corners with this since cabling is cheap and you can pull two at a time. When I was building my house I pulled at the very least, two RG-6 Quadshield, two CAT5e, and two Fiber lines all wrapped up in a PVC jacket. In most rooms I pulled two and in special rooms I pulled four runs to the wiring closet. I also ran conduit in areas I knew I would need future connections or additional cabling… it’s easy to do it when the walls are open. This post is for home owners out there that either forgot to pull more Cat5e cabling and for the home owners that had a builder that wasn’t tech savy.

You will need the following tools: (All are available at your local Home Depot — I like to use the Ideal Brand)

NOTE: If you need Gigabit speeds, then you will need to pull Cat5e/Cat6 cable and follow all the standard wire pulling guidelines. We are going to derate the cabling, I have achieved 100Mbps speeds in this setup. In my wiring closet I have three Linksys switches. Two are 10/100Mbps 16 port switches and a single 8 port Gigabit (1000Mbps) switch. The Gigabit lines are terminated with RJ45 connectors directly to the switch. The 10/100Mbps lines are terminated to a Leviton Cat5 termination module (also found at Home Depot). Then a standard Cat5e cable bridges the connection to the switch. Since I’m using a Panasonic phone system I only need two pairs… the other two pairs were going to waste… so I decided to hook them up as another ethernet jack.


Lets start with the Cat5e jack. I followed the T-568A standard, which is supposed to be the standard for new installations. The jacks have both the “A” and “B” color codes on them to make it easier to wire. Strip back about 3” of the Cat5e cable, we are going to be using the Orange and Green for the ethernet jack. The colors will match up perfectly to the T-568A colors on the side… Green to Green, White/Green to White Green, Orange to Orange, and White-Orange to White Orange. Punch them with the Punchdown Tool and you’re done. This jack will give you 10/100Mbps… you might want to label it differently or color code it if you also have a 1000Mbps jack.

For the telephone, we will use the blue and brown pairs. Wire up the Blue to Blue, White-Blue to White-Blue and Brown to Orange, White-Brown to White-Orange. Punch those down with the punchdown tool and you have a two-line jack/4 conductor jack.

In the final step, you will need to terminate all the lines on the Leviton Cat5 module. If you look at the photo closely, you will notice that the ethernet jacks are terminated Orange to Blue, White-Orange to White-Blue and Green to Green, White-Green to White-Green. The telephone jacks are terminated Blue to Blue, White-Blue to White-Blue and Brown to Orange, White-Brown to White-Orange. Once you get everything punched down, it’s best to test with a real line tester device… if you don’t have one… plug in a telephone in each telephone jack and a computer in the ethernet jacks. If they work you’re done! If not… well, you’ve got more work, checking all the lines.

Here are what my jacks and plates look like. I’m not a big fan of screw’d plates, so I’m using Leviton’s screwless wall-plates throughout. They are a snap to install.