A Wi-Fi VSWR Meter to build yourself 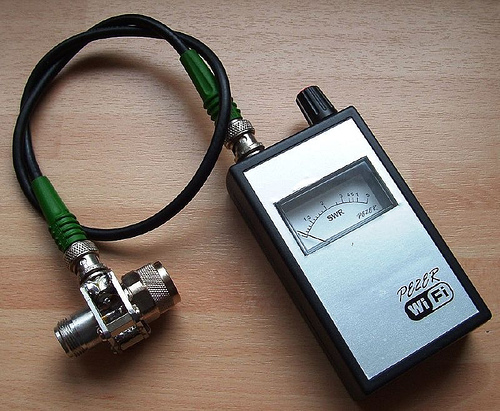 A Voltage Standing Wave Ratio (VSWR) meter useable at the 2.4GHz band is hard to find. The circuit on this page serves as a Voltage Standing Wave Ratio meter or VSWR meter for the VHF-UHF-SHF frequency range. This includes the Wifi (802.11b/g), 2m, 70cm and 13cm Radio Amateur bands.
The device consists of two parts. One RF head and a (preferably analog) indicator. The picture to the rights shows the Wifi SWR meter Mk-III – the third generation of the design.

Below, the last control is the Sensitivity pot. It is used to adjust the meter sensitivity to the RF source used, such as a Wifi Access Point, or VFO. RF Input power must be somewhere between 15 and 20dBm (30 to 100mW)

Wifi hardware transmits in short bursts. You need a “peak-hold” circuit to convert the DC pulses from the RF head into a stable DC voltage for the indicating instrument. The design shown here is based on a quad OPAMP, TL084. OPAMP U1A creates a ‘virtual ground’ so that the OPAMP can be powered by a single 9 Volt battery.

The voltage from the RF head consists is a pulsed DC signal (so no 2.4GHz present). The pulse width varies between 0.2-0.5ms with a repetition frequency equal to that of the SSID (beacon) interval set in the AP. Voltage is a few volts max and depends on the amount of unbalance in the bridge.


Potentiometer SENSITIVITY is used to set the meter at full scale deflection with a fully unbalanced bridge (short circuit plug attached to the Zx port). The worst-case input VSWR of the bridge is 1:2, so you will NOT destroy your AP;-)

OPAMP U1B forms a peak-hold circuit wit the general purpose diode D1, C3 and R5. U1C and U1D buffer the output for the meter and a second (normally unused) output. Output to the meter is limited to +1.2/-0.6 Volt by means of three 1N4148 diodes.

Switch S2 can bypass diode D1. With S2 closed, the OPAMP U1b acts as a unity gain buffer. The meter will react directly to changes in VSWR. This is beneficial when the VSWR meter is used with an amateur band radio. If the bridge is used exclusively on Wifi equipment, S2 can be omitted.

OPAMP U1D provides an adjustable voltage to the – terminal of the meter. This allows compensation for leak-currents of D1 and offset voltage of the OPAMPs.