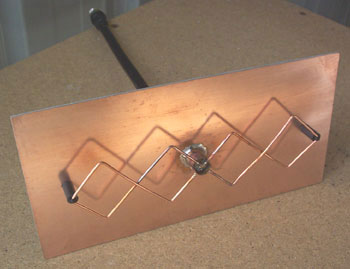 Hee is the details on building a double biquad antenna with approx 13dBi gain. The test results indicate that the gain of the double biquad is approx 2dBi higher than that of the biquad, which is a significant improvement as 3dBi is a doubling of signal.
I made a double biquad using exactly the same construction techniques as described on my Biquad Antenna Construction page, except the rear reflector is 110x220mm, and the element is double the size.

To provide some more robustness, and to ensure the element doesn’t move, I added some spaces at each end of the element. The spacers are made from a small section cut from a hollow reticulation riser, and attached to the reflector and element using a small wire tie. Measure and cut the spacers to be 14.5mm long, as this should result in the element being the correct 15mm from the reflector.


As with the biquad antenna, if you intend to use one of these outdoors, I’d recommend you place it into a weather-proof enclosure, to prevent corrosion, and to prevent water ingress into the coax.

To determine the difference in gain between a biquad and the double biquad, some tests were performed, with the signal, noise and SNR recorded.