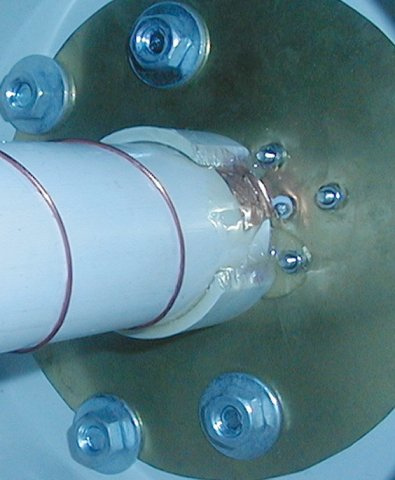 The aerial was derived from information on helical antennas in the ARRL Antenna book. The idea behind this aerial was for anyone to be able to make their own aerial for point to point links, and do it cheaply. You can even it with any other equipment that requires a broad bandwidth in the 2.425GHz band such as the new 802.11 wireless network cards or video transmitters.
-Cut a length of 40mm PVC to 550mm (55cm).

-Wrap the winding template around the PVC tube and tape the seam together. It doesn’t matter if you use the RIGHT or LEFT handed template so long as the helical at the other end is the same. Make sure the spirals line up the at the seam. A small gap at the seam is OK. If you combine a left handed aerial with a right handed aerial then you’ll get virtually no usable signal.

– Using a sharp point like a scribe, perforate the template along the helical line at regular intervals, say 5 or 6 per revolution. This will leave marks in the PVC you can follow when wrapping the wire around. Slide the template along in stages until you gave a complete spiral running the length of the tube. Mark the where the end of the spiral on the template finishes. You should have a few mm of tube left over. This is OK.


– Take the 1mm wire spool and using something like superglue or Loctite 424 attach the end of the wire to where the spiral ends at the tube (the end point described above.). Slowly wind the wire around the tube, following the spiral indentations. At fairly regular intervals like a 1/2 or 1/3 turn add some more glue to hold the wire in place.

– As you approach the base end don’t glue down the last turn and leave plenty of excess wire (10cm or so) hanging off the end. Let the glue dry.

– Cut out from the brass shim or Sara Lee pie tin the 130mm diameter circle (from circle.pdf).