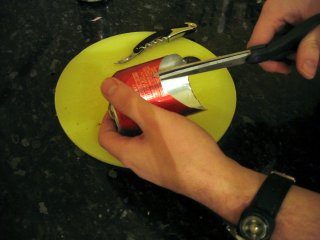 Here is how to make a DIY iPod cradle which fits into a car cupholder, similar in concept to the ones sold by companies such as Belkin and Griffin. Of course you could adapt this design to other devices: handheld GPS, phones, other MP3 players, palmtops etc.
Start with two 330 ml soft drink cans (or whatever size is available locally – the can just needs to fit in a cupholder, and be wider than an iPod). I’ve chosen a Coca Cola can and a vanilla Diet Coke can. If you live in a part of the world where Coke is not sold, you could use some other brand of drink.


Please be very careful when cutting the cans and handling them once cut. I once sustained a nasty cut using similar techniques to this, fashioning a mug out of an empty beer can at the Reading festival 1994, so that the nice girls in the next tent could give me a cup of tea. Protective gloves are a good idea, although I don’t wear gloves in any of the photographs. Do as I say, not as I do.

Wash the can out with water, and drain it as much as you can.

Make a horizontal knife cut near the closed end of the can, then extend it with scissors until you have removed the bottom of the can.