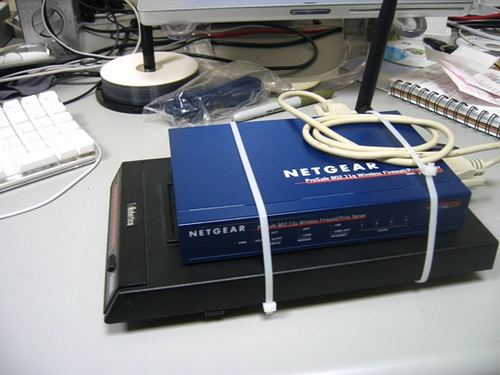 We decided to build a fully functional dialup router using a spare 56k modem from our old dialup bank, a dialup account with a national provider, and a Netgear wireless firewall. The basic philosophy by this device is that it acts not just as a dialup router, but as a DHCP server for your local network on the same subnet your network would ordinarily be using in full operation.
The Parts We Used:

Configuring everything is fairly simple, but does require an attention to detail. Unpack the Netgear firewall and set it up with a power connection. Using either the wireless connection it creates, or the ethernet hub on the device itself, open the admin interface located at 192.168.1.1. The password and username are inscribed on the bottom of the firewall, and should be admin:password by default. Once in the administration interace, please change the password at a bare minimum to prevent undesired modifications to the configuration you’re about to create.

One of the reasons that we chose the Netgear device for this task is that it has a serial port for an external modem, the second reason is that it can use that modem as its primary internet connection and the third reason is that it can behave as a router on any configuration you choose to give it. This last part is crucial for us, as many of our office devices, including two printers, a copier and our other wireless hubs depend on fixed IP addresses that other such devices (Apple Airports in specific) will not honor.

Once you setup a new username and password, and a new SSID for the network, it’s time to setup the internet-side TCP/IP configuration for the OOB device. This is where the Earthlink account comes in mighty handy. You could do it with any dialup number, but in such cases as this, where long distance telecommunications have been disrupted, it’s important to use a local number for dialing, as long distance circuits will be in high demand if they’re working at all. Earthlink maintains an up-to-date list of local access numbers at their website: www.earthlink.net/accessnumbers and in our case there were four numbers for Jackson, MS. After cursory dial-in attempts from our location, it was easy to find which number was working the best. Adding the account information to the router, and the local seven digit dialup number, is fairly simply done from the administration interface. Set the dialup connection as the primary method of internet access (a radio button in the configuration) and then reboot the router.


Once the dialup connection is in place, it’s time to add the router-side TCP/IP configuration. This is just like setting up any other router, make sure to have the IP address for the router in place, as well as a valid subnet mask, and some DNS servers handy. Earthlink lists their DNS servers on their account page at: myaccount.earthlink.net. Once those are plugged in, set the DHCP range for the network config and get everything ready to go. Once this is done, apply the configuration and power off the wireless firewall.

Now, using a set of small cable ties, secure the two power cords together. Each device will likely use a wall-wart style transformer on the end, so be wary that you may need some slack at that end of the power cable. If you like, you can use a three outlet extention to make it so that the OOB device uses only one three-prong grounded outlet. I didn’t do this, simply because I had a budget of $200.

Once complete, setup and test the router, making sure that the modem is dialing and connecting, and that the router is giving out appropriate DHCP addresses and allowing for network access. Test both the wireless and the wired connections just to make sure you didn’t miss anything. Pack it up, and send it just ahead of any storm, or in response to any crisis. While 56k dialup won’t be good for surfing boingboing or watching streaming video, it will allow for data transfer including email, instant messaging and other low-bandwidth activity. Better still, it allows for one dialup account to serve an office of several people without taking up more than one phone line at a time.

These are great devices to have as spares, and can be assembled with very few parts, very cheaply in less than an hour’s time.