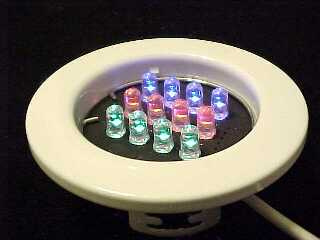 It’s nice to have a bit of colour in your house for style reasons, so here are some neat little PCB’s that accommodate a mixture of red, green and blue LEDs giving you the option of controlling the colour they emit. They are designed to fit into standard MR16 downlighter frames for convenience of mounting.

If you want to make some of these lights then you will find the PCB layouts and foils below in TIF format. If you view the images directly they will look a bit ragged at the edges. This is because they have been scanned from a laser printed original, but when they are printed at 600DPI the image will be fine. I chose TIF because it carries information that results in printing being done at the correct size.

To print the tif files you should download them to your desktop and use something like paint to open them. It should allow them to be printed in the correct scale. I’ve added a small section of half inch scale to the controller PCB file on the “make an RGB controller” page to allow you to validate that your printer is producing output of the correct size.
To make a transparency directly, try laser printing the image onto good quality tracing paper and applying it with the printed side against photo sensitive PCB material for exposure in a UV box.


Here are three standard MR16 downlighter frames fitted with LED colour panels. For simplicity and cost reasons I’ve used just four LED’s of each colour, and there are two different layouts of the LED’s too. The output intensity is very high but not as high as a halogen lamp, so the lights are best suited to colour wash applications in low ambient lighting conditions. They were too intense for the camera and caused a bit of pixel streaking which interestingly shows as a dotted line due to the pulse width modulation of the LED’s.

As you can see, the modules are just small round PCB’s that sit into the light fittings in the same way as a spotlight would, including the use of the standard retaining spring clip. The LED’s are mounted in the normal way, but the resistors are mounted on the solder side of the PCB for neatness. A five way Molex connector can be mounted on the back too if desired.

The first module has the LED’s mounted in three straight rows. It was designed for simplicity and allows the tracks to be quite chunky which may make life easier if you etch some of these boards yourself. The simple layout also means that the red LED’s are mounted as the central stripe since they are a circuit of four in series as opposed to the green and blue which are two pairs of LED’s in series. This is due to the forward voltage of the green and blue LED’s being higher which means that less can be run in series across a given supply voltage, which in this case is 12V. Because of the layout of the LED’s the pinout on the Molex mounting position is slightly different with the red connection in the middle.