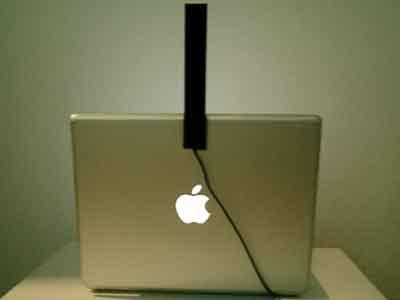 Step 1 Size up your existing antenna hookup
Airport Extremes use the MC Card connector. You could use any antenna you want as long as you get the right pigtail for it (and the impedance matches, which I think is 50 ohms here). I opted for a 5.5db flat blade antenna.

The connector coming off the existing internal antenna is going to have to be pushed back into the notch it comes out from. You’ll quickly realize it doesn’t go back far enough and obstructs the little metal flap from closing back. We’ll cut part of that flap off.

Step 2 Eyeball the route for the cable to travel out of the battery compartment
The battery itself is another problem. You’ll have to cut a notch in the flat metal that sits right above the metal Airport Express flap in order to let the cable out.

Step 3 Cut a notch in the Airport Extreme flap/door to let the cable out of the Airport Extreme slot
Start by covering up all the little crevices and cracks with masking tape so that only the little piece of the metal flap is exposed. Take that out with a Dremel using a cutoff wheel, then blow away the filings really well with compressed air.


The flap should close around the internal antenna’s connector with it shoved all the way back into the notch it comes out from. Unfortunately, the flap probably won’t stay put any longer because you just cut off the piece of metal that keeps it in place. But that’s ok. Now you need to notch the battery to let the cable out.

Step 5 Fit it all together
Getting it all back together can be a little bit of a trick. The problem is that the original internal antenna connector juts out just a bit too much, and I feel comfortable notching neither the connector nor the part of the battery that hits it. It’s so close that you can just tightly tape the connector back in it’s little nook, tape the flap shut, and drop the battery down with a little bit of jiggling. Voila! You’ve hooked up an external antenna! Now you realize the cable is thicker than the gap under the Powerbook. You need to put new feet on the bottom that raise the whole thing up about 4mm or so. I snagged some feet from the bottom of a Sonicwall Firewall that was being rackmounted, but you can improvise with anything that suits you, and Radioshack usually has some stick-on feet that will work.

Now just stick some stick-on velcro on the back of the antenna to mount it to the display. You can substitute any antenna you want, provided it’s designed for wi-fi usage. However, just about anything will perform better than the stock antenna!