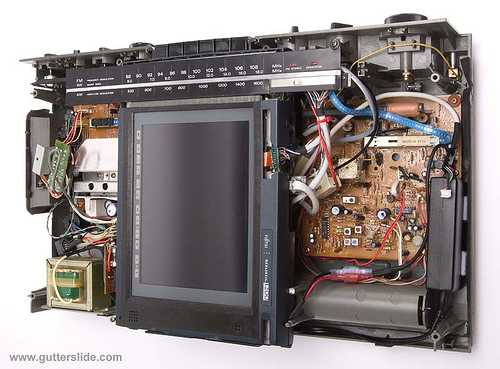 Functional as both PC and boombox. radio works, but the indicator had to be removed. the built-in mics will feed into the tablet, along with line-in and possibly radio so i can record radio to the harddrive, if i ever wanted to. the line-out of the tablet goes to the line-in of the boombox. the headphone jack on the boombox is unchanged, and the amplified external speaker jacks on the boombox had to be removed to make room for the power switch, standby and restart switches.

the powersupply for the tablet is internal, and wired into the outlet on the boombox, so you only have to plug in the standard AC wire for both units to get power. the tablet also has a battery for complete portablity.