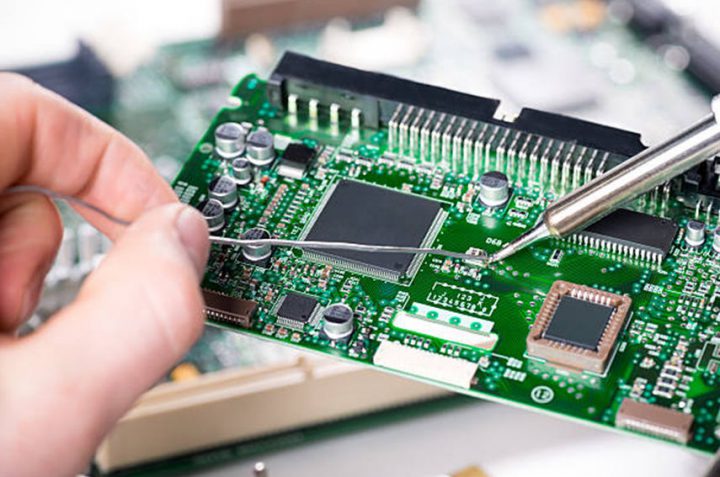 While the soldering process may seem difficult to you as a beginner, but it is rather an enjoyable process once you get the hang of it. Soldering is the process by which two or more components are joined by dissolving solder and running it between the joint. This process is used during PCB fabrication to mount SMT components onto the PCB. The soldering process should be done properly because it has a huge influence on the performance of the circuit. Here are some of the basics of PCB soldering you should have an idea about.

What are the uses of soldering?

Soldering has a wide range of uses in electronics. It helps in joining components in circuits and making electrical contacts. Soldering takes us of alloys whose melting point typically lies in the range below 450°C. The components are connected through their terminals with the circuit with the help of the soldering process.

The types of soldering processes:

Wave Soldering: This is a large scale soldering process in which components are soldered into the PCB to form an electronic assembly. This process is fast and efficient as compared to manual soldering. Machine and designated components are used which can handle both SM and TH processes.

Manual Soldering: This is the oldest form of soldering in which the surface is heated to melt the solder. However, we now have far more efficient methods so this technique is not used. It is used for certain start-ups and can also be used where the soldering of very small or meticulous components is required.

The soldering process is a very important component of the entire process. However, this process is equally dangerous and certain precautionary measures should be adopted. Some of them are mentioned here:

Flux and its Function:

Flux is an important part of the PCB soldering process. It is a purifying agent which helps to reduce/eliminate the toxins formed due to oxidation and. It helps remove rust from the elements being soldered. Flux also helps the solder to melt and work properly. It also helps remove the wetting bridges.

Now that you have learned the basics of the soldering process, you can now proceed to make your own PCBs. Look for a reliable manufacturer and make sure that all the necessary steps are taken in each part of the process for a well-built PCB.

This article and associated images (except the Wikimedia image) are is provided by PCB Manufacturer PCBGOGO. You can contact them even for small order.