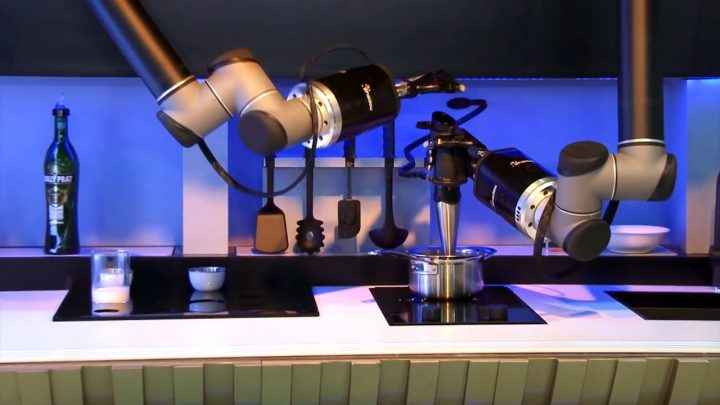 Robots are not new. We’ve been using them for a multitude of tasks for decades. Any modern manufacturing or processing plant or factory uses robots in some way or ways. Manufacturers know that to stay competitive, you need to cuts costs and improve efficiency in your production line. Robots are the perfect solution.

We have used robots in the home environment for some time too. Robotic vacuum cleaners have been on the market for many years. They are programmed to clean and clean they do. But in 2018, Moley, a London based robotics company has brought all the technology and engineering brilliance of robots into one package to produce the first all robotic kitchen.

It’s already been tested in the Robotics Show in Hannover Messe. Reviews have been overwhelmingly positive. The three major talking points are as follows.

An example of the third point is that iTunes has a wealth of recipes available and these link up with the marvellous robotic kitchen. When you have technology brilliance and team that with a vast supply of online recipes, you create the perfect kitchen experience.

Bring the super chefs to your place

It seems incredible but it’s true. Think of some of the world’s best and best-known chefs. Think of the great recipes they have created. In fact choose 100 of these stunning meals. Now sit and prepare to dine on the best of the best because the Moley robotic kitchen is fully-automated. It does the lot just as the super chefs would do. But that’s not all. Once your robotic kitchen has produced a magnificent meal, it cleans up afterwards. That surely is an example of a total package. You control the recipe choice but after that the robotic kitchen prepares and cooks the meal and then cleans everything afterwards.

So how does it work?

You, the human in the equation, actually have to do something. You must choose the following:

It’s that easy. The “brains” of the robot has received the information and the ingredients you’ve chosen and the rest is done automatically.

Moley Robotics are not just the inventor and creator of the robotic kitchen, they are also the suppliers of the recipes and the ingredients which are part of each recipe. They’ve thought of everything.

But there’s much more. What if you’re on a diet? What if you want a cooking style of a particular chef? What if you’re counting calories? Never fear because the intelligence of the AI (Artificial Intelligence) can sort out your requirements for you. Feed in the relevant data and the robots do the rest.


What do you get?

You don’t need anything else. The robotic kitchen comes with everything including the cooking apparatus, the utensils, the appliances and even the kitchen cabinets. No need for the kitchen sink – that comes as well.

The company is working on an in-built cleaning process so all the bench tops, cooking equipment as well as the utensils are cleaned perfectly once they have been used.

Top chefs have provided some of their best recipes. Several dishes are difficult if not very difficult to make. The creative chefs talk about the amount of time and effort it takes to get the particular dish just right. Not a problem for the robotic kitchen. It out chefs the chefs.

The creator, Moley founder and chief executive Mark Oleynik, had a simple philosophy. He believed many people want to eat well-cooked good quality food but either don’t have the time, energy or skills to prepare and cook that food. You could to have a chef in your home or you could invest in a robot with all the necessary equipment and utensils, and have that robot do the cooking for you.

The whole idea is in the early stage. Yes there have been demonstration models at robot shows in different parts of the world and much progress has been made. But more needs to be done.

Whilst the robotic kitchen can cook many different types of meals, it will need further development for such things as a steamer. Many Chinese meals have steamed rice as a major ingredient.

It can be adapted

Many people would like a robotic kitchen but want to retain their current set-up. This means a major option will be available. Your present kitchen can be replaced by the robotic version or, alternatively, the basic robot components can be added to your present kitchen set-up.

And the number of recipes you will be able to offer is limited only by your imagination. Your collection of meals is created by the owner. Find a recipe you really like and have it added to your list.

Whilst great strides have been taken in the creation and development of the robotic kitchen, the future still has many steps to take. For example, one plan is to link owners of robotic kitchens enabling them to share recipes which have worked really well.

It’s easy to see how investors both companies and private are keen to be part of this invention. Eating is a staple of life and as we become busier and time poor, the chance to eat well and healthier without having to prepare and cook our meals, has enormous appeal.

The market must surely be seen as enormous. Of course with all new developments, and especially those using new and state of the art equipment, production costs at first are high meaning the retail price of the first robotic kitchens may challenge many people. But once the production line is up and running, costs will fall as will the retail price.

The robotic kitchen may soon become a standard feature in millions of homes.