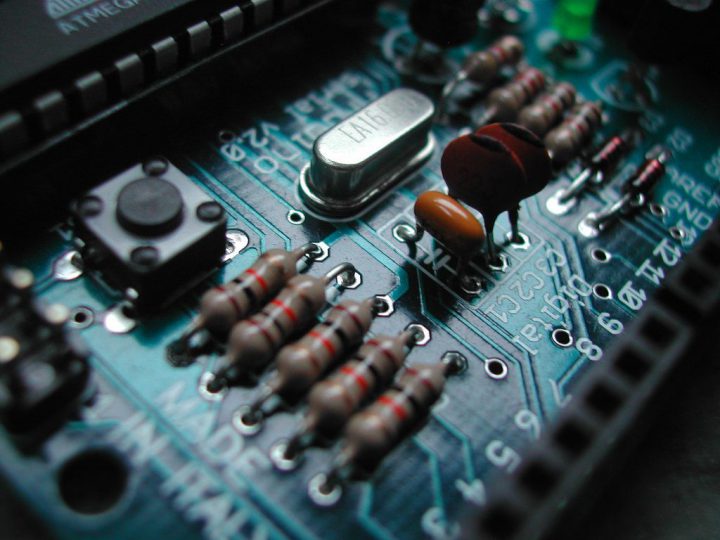 If you are new to electronics or starting to build electronic circuits, then the important thing to do is to get familiar with few Basic Electronic Components and Equipment. Without understanding these basic electronic components i.e. their values, ratings, purpose etc. your circuit design might not function as expected.

There are many electronic components like Resistors, Capacitors, LEDs, Transistors, etc. and there are also many equipment like a Power Supply, Oscilloscope, Function Generator (or Signal Generator), Multimeter, etc.

In this tutorial, you can get a brief overview of few of the most common basic electronic components.

You can easily understand the concept if I divide this tutorial in to Basic Electronic Components and Measurement and Analysis Equipment. So, first, I’ll start with the basic electronic components.

Active Electronic Components can control the flow of electrons through them. Some of the commonly used Active Components are Transistors, Diodes, ICs (Integrated Circuits), Power Sources (Batteries, AC and DC Power Supplies), etc.

Diode is a non-linear semiconductor device that allows flow of current in one direction. A Diode is a two – terminal device and the two terminals are Anode and Cathode respectively. The following is the symbol of a Diode. 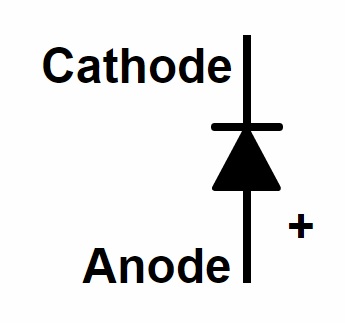 There are again a variety of components that come under the category of Diodes. They are PN Junction Diode, Light Emitting Diode (LED), Zener Diode, Schottky Diode, Photodiode and DIAC.

Normal PN Diodes are often used in AC to DC Converter circuits. You might be familiar with LED or a Light Emitting Diode. It is a semiconductor device (or a PN Junction diode, to be more specific) that emits light when activated.

A Zener Diode allows flow of current in both directions and is often used as a voltage stabilizer. Schottky Diode is similar to a regular PN Diode but with less forward current and hence is often used in fast switching circuits.

Transistor, the invention that changed the future of electronic circuits, is a semiconductor device that can be used to either switch electrical power or amplify electronic signals.

A Bipolar Junction Transistor or BJT uses both the charge carriers i.e. electrons and holes and is often used as a current amplifier. Based on the construction, BJTs are further divided in to NPN and PNP Transistors. 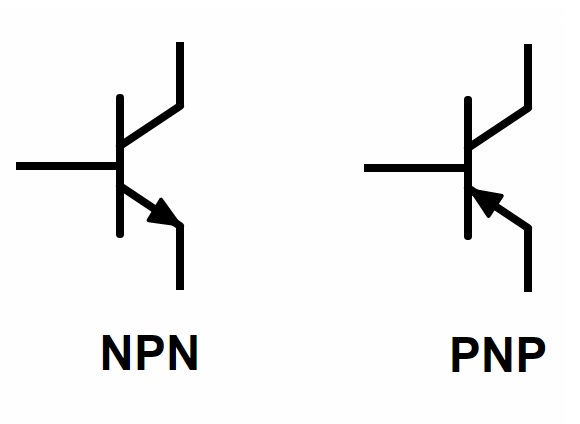 Based on the construction of the FETs, they are divided in to two types: N – Channel and P – Channel. MOSFETs are commonly used in power supplies, Audio circuits and other power electronic applications. 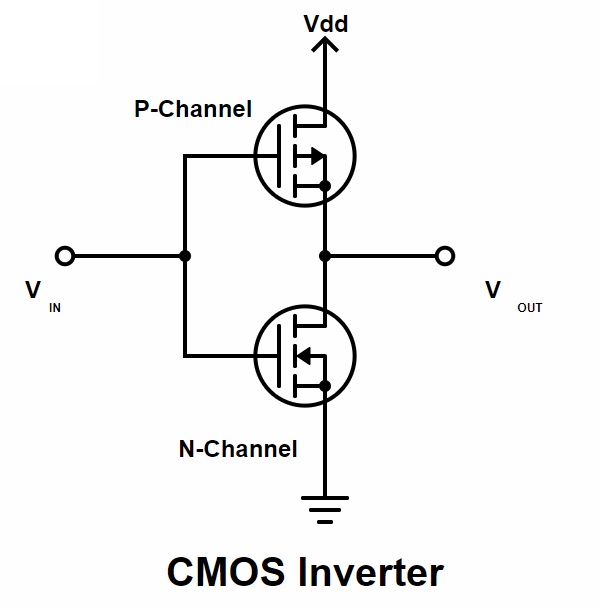 An Integrated Circuit or an IC is an integration or incorporation of several electronic components (mainly transistors) on a single device (or chip) made up of a semiconductor material (usually Silicon).

ICs are again divided in to Analog ICs and Digital ICs. Analog ICs work on Analog Signals like Temperature, Audio, etc. which are continuously varying in nature. Digital ICs on the other hand, work on Discrete Signals i.e. zero volts and a non-zero volts (like 5V or 3.3V) that are represented as Binary 0 and 1. 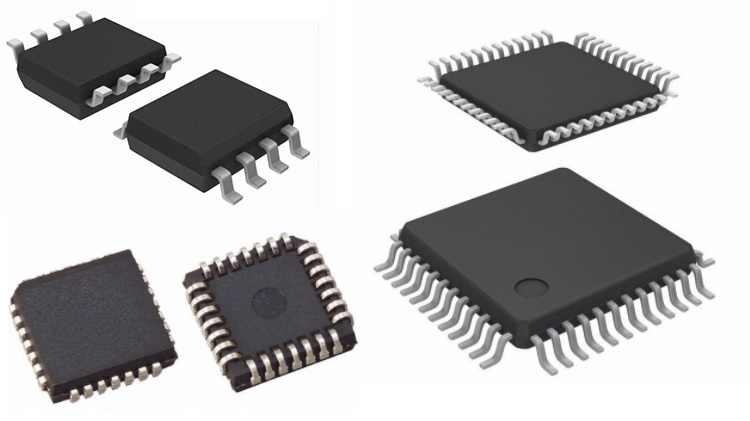 Passive Components cannot control the flow of current through them i.e. they cannot introduce energy in to the circuit but can increase or decrease voltage and current.

Variable Resistors, on the other hand, have a variable resistance that can either be changed manually like in case or Trimmers and Potentiometers or which controlled by external factors like Light Dependent Resistor (LDR) or Thermistor. 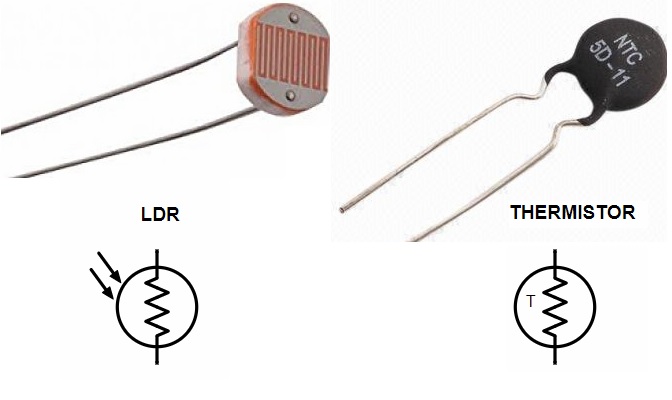 Ohm’s Law defines the behavior of a resistor which states that the current through a conductor is directly proportional to the voltage across the conductor. The proportionality constant is called as Resistance.

The mathematical representation of Ohm’s Law is I = V/R.

The second important passive components is a capacitor, a device that stores energy in the form of electric field. Most capacitors consists of two conducting plates that are separated by a dielectric material.

If Q is the charge on any one of the conductor plates and V is the voltage between them, then the Capacitance C of the Capacitor is C = Q/V. 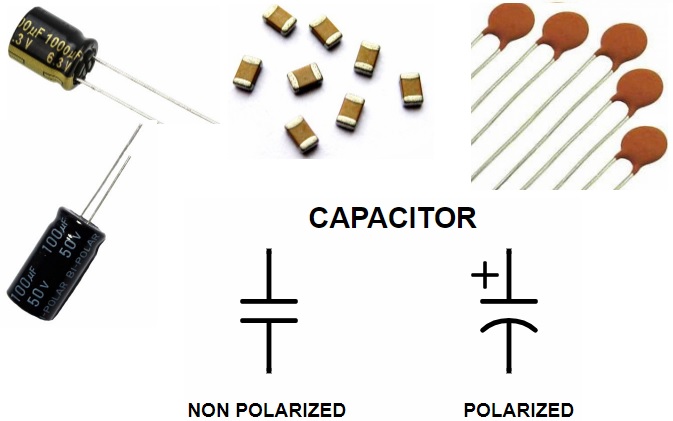 In electronics circuits, a capacitor is mainly used to block DC Current and allow AC Current. The other applications of capacitors are filters, timing circuits, power supplies and energy storing elements.

Inductor is also a passive component and is widely used in AC equipment like filters, chokes, tuned circuits etc. 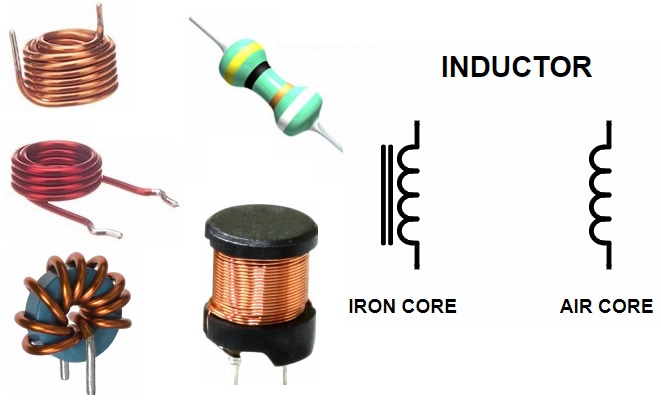 The core around which the coil is wound i.e. air, iron, ferrite etc. will determine the strength of the magnetic field. Inductors opposes the change in electric current through them and the changes in current will result in induction of voltage.