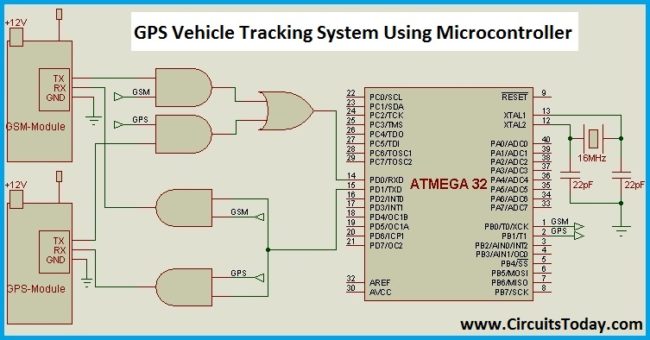 This article mainly focuses on the idea and logic behind GPS Vehicle Tracking System with remote monitoring and security access using mobile phone. The GPS-GSM module is interfaced using a single microcontroller and the real-time GPS location of the system is inquired using SMS feature. The system is designed to operate only by the registered users. There is an option to add or remove the users in real-time.

How does Car Tracking System Work?

The GSM Module is used to manually interface with the system, through the SMS feature. To know the GPS location of the object, the user has to send an SMS to the system with a predefined template. The system will read the message and acquires the GPS location instantaneously. Then after, the system sends an SMS to the user with the GPS data i.e. Latitude and Longitude as a message. Thus, an object or a system is traced.

To track a vehicle, a continuous stream of data is required. So, by sending an SMS to the car with a tracking template, the system will continuously update the GPS location of the object through SMS, until a stop indication is sent. The update frequency is sent along with the tracking template. This frequency is in terms of minutes, i.e. for example if the frequency mentioned is 5 then the system will update the data (sends SMS) after every 5 minutes. This value ranges from 1 to 10 and this can be varied to desired range in the program.

Is the GPS Based Vehicle Tracking System Secure?

Is it possible to add a new contact number in real-time?

In order to add a new user, a registered user has to send 3 as a message to the system and the system will send a template to add a user. The template is as below,

The braces should not be removed because they are used as identifiers in the program code. The new user details will be updated in the EEPROM also.

By sending RU1 user number 1 will be removed from the system permanently. If there is only one user in the list, the system does not accept the request to remove the user, as the system cannot be operated then after. However, it is better to program a contact number of a user within the program code.

Similarly, there are options to know the account balance and to clear the message counter which is useful if an SMS plan is used.

How Many UART Ports Should the Microcontroller Possess?

The program is developed using C-language using Programmer’s notepad of ‘Winavr’ software. Here, the microcontroller used is ATMEGA 32 but, it can be easily modified for any other microcontroller having sufficient peripherals.

The GSM Module has to send and receive SMS and the GPS Module has to provide GPS location information. For this purpose, two start-up functions are used. These functions are called after the Power ON/Reset of the microcontroller. Below is the code for the start-ups along with their operation.

Receiving and Processing the UART Data

The data sent by the modules is received by the UART Port of the microcontroller and the timer/counter is initialized after receiving each byte. When there is a significant time gap after receiving a byte, an interrupt is generated by the Timer/Counter indicating the end of RX Data. Now the received data is processed through a function which is defined as,

This function analyses the received data to perform a specific action. The first few bytes of the received data are verified with some possible options and if a match occurs, then the respective action is performed. Below is the keyword verification part and the complete code is provided at the end of the article.

The SMS received contains the sender details like the ‘Contact name’ and the ‘Contact number’. This contact number is compared with the registered users and if a match is found, then the sender is confirmed as a valid user and the message is processed. Otherwise, the system sends a notification about the invalidation. Below is the code to verify the user,

The GPS data is obtained from the GPS module through specific AT commands. For SIM 908 module the GPS location can be obtained using the command:

‘2’ in the command is to request the GPS Data in the GGA protocol.
The response for this command is as shown below.

If separate GSM and GPS modules are used, after selecting the GPS module, wait for GGA to be received and then get the Latitude and Longitude details. As the aim of the project is to find the GPS location of the system, only Latitude and Longitude details are enquired. However, by selecting different protocols, the various parameters provided by the GPS receiver can be obtained. These commands are available in the datasheets of the respective module you are using.

In order to track the system, the user has to send T<min> to get the GPS location every specified number of minutes i.e. send T1 to receive the GPS data for every 1 minute. For this purpose, a 16-Bit timer/counter is utilized. The timer set to run in Clear Timer On Compare Match and the Compare Match Registers are loaded with a value equivalent to 1 second time interval. Thus for every second, an interrupt is generated and seconds variable is incremented. When the ‘seconds’ count equals to 60, the ‘minute’ variable is incremented and this value is compared with the update frequency in tracking template sent by the user. If a match is found again GPS data is requested and an SMS is sent to the user.
Remember that, only one user can track the system at a time until tracking is stopped by the requested user or other users. In order to stop tracking, any of the users can send S as a message and the tracking will be stopped. The program code for tracking is shown below,

The link to winavr software is provided below,
https://sourceforge.net/projects/winavr/files/