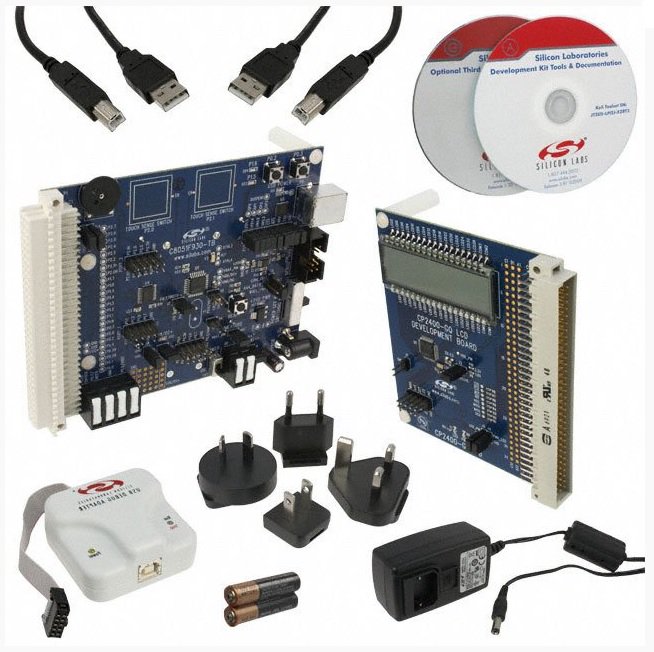 In this project, we'll build a weighing scale using a C8051 microcontroller development kit, a load cell, and the Simplicity Studio IDE. The measured weight will be displayed on an LCD screen.

The LCD used in the project is part of the Silicon Labs CP2400DK development kit.

The manufacturer part number of the LCD device itself (figure 2) is VIM-878-DP-RC-S-LV. If you include the decimal point and the apostrophe (for each digit), this "14-segment" LCD display becomes a 16-segment display. And when summing all the 16-segments of the eight digits together, we see a total of 128 segments. Such a 128-segment display mandates the use of a 128-segment driver, and Silicon Labs has decided to use driver p/n CP2400 (Figure 3).

Figure 2. LCD screen with 16 segments for each of the eight digits (total of 128 segments). Image courtesy of Digi-Key.

This particular load cell is commonly referred to as a straight bar load cell or a parallel beam load cell. Such load cells are typically available in many rated loads (i.e., maximum loads); the one utilized in this project is rated for a maximum weight of 10kg (or 22 pounds). Its advertised rated output is 1±0.15mV/V. This means that when the load cell has its maximum rated weight applied (10kg in this case), then the output voltage will be 1mV (±0.15mV) per every 1V applied to the load cell's excitation (see figure below). And when I say the voltage is "applied to the load cell", the voltage is actually being applied to the Wheatstone bridge strain gauge's excitation leads. Similarly, it's the Wheatstone strain gauge the produces the output voltage (see figure below).

For this project I'll be applying 5.0VDC as the excitation; therefore, when a 10kg load is applied to the load cell, its VOUT will be 5.0mV (±0.75mV). And because 5.0mV is such a small voltage, it will need to be amplified prior to being sent to the microcontroller.

The differential amplifier that I chose to use is actually called an instrumentation amplifier, or in-amp. I began this project using the INA126PA in-amp from Texas Instruments—I purchased this device from Digi-Key for $3.15. However, when it failed to perform as advertised and after troubleshooting it for about an hour, I concluded that it was a defective part. Luckily I had also purchased the AD627ANZ, made by Analog Devices. I purchased this part—quantity one—from Digi-Key for a whopping price of $8.45! I had no idea that these in-amps cost so much money! Fortunately, this device worked flawlessly. Hence, I think I'll be using in-amp devices from Analog Devices in the future as opposed to TI parts, although generally speaking, I'm a fan of parts, and prices, from TI. Setting the gain for both of these in-amps is simple: all that’s required is one external resistor. Also, both the TI and the Analog Devices part are advertised as single- or dual-supply devices, and I much prefer to use a single-supply.

The microcontroller uses the SPI interface (SPI channel 1) for communicating to the LCD driver—figure 7 below shows Simplicity Studio's hardware configuration GUI for how the C8051's SPI is configured.

Choosing the Gain for the Instrumentation Amplifier

As mentioned before, the excitation voltage applied to the load cell is 5.0VDC, which will produce an output voltage of 5mV (at full load of 22 lbs). Though the microcontroller's ADC has an input range of 0 to 3.30VDC, I want 3.00VDC to correspond to the full load (22 lbs). This will provide some headroom for the load cell's overload, which is 120% of full load, or 26 lbs. Given these conditions, I can calculate the necessary gain for the in-amp, and then choose the appropriate value of the gain resistor (RG).

Figure 8. Connection diagram. It's important that the decoupling capacitor (C1) be placed as close to the AD627's power pin as possible. Click to enlarge.

Prior to powering up the microcontroller development kit, after all the connections have been made, be sure to configure it as follows:

Attaching the Load Cell Base Plates

The load cell itself has holes with, to my surprise, screw threads. This makes it very handy when attaching the load cell to base plates. Again, to my surprise, one set of holes is larger than the other. Hmmm, I'm not sure why the manufacturer did this but, nonetheless, I was able to find the appropriate screws at the local hardware store.

Figure 9. Load cell mounted to base plates. Click to enlarge.

Similar to another project of mine (Adding an LCD and Keypad to a Tachometer and Speedometer), for this project I heavily leveraged Silicon Lab's example LCD project (CP240x_LCD_Example), which made my firmware-writing task much easier.

The output of the in-amp is connected to port 0.6, which is the input to the microcontroller's ADC. Below is a list of features/goodies that I've incorporated into the firmware:

All the code for this project can be downloaded from the link below.

Building and Loading the Code, and Verifying the Accuracy of the Scale

After downloading, building, and loading the code, I used my kitchen scale as a reference/comparison for taking weight measurements. As seen in the video (below), I place various weight samples (my old textbooks from college!) first on the kitchen scale and then on the load cell system. And as you can observe, both scales are extremely close in their displayed measurements.

Next Steps for Making a Real Product

If you, or I, decide to make an actual weight-measuring system based on this project using a customized PCB design, be sure to follow the grounding and layout recommendations as described in the datasheet (page 20). Also, replacing the wooden base plates with metal plates would increase the stability and robustness of the physical design.