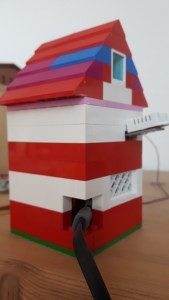 In this post I’d like to show you some of the projects that other people did based on my WeatherStation library. I hope this will inspire you to get creative and extend the code with you features. Or maybe you have built a nice case around the WeatherStation. If you do so please contact and me and share your creation with the world. I’m more than happy to put them into the gallery!

Thomas Arlitt from Germany built his Weather Station based on a 2.6″ display from Drigole. His daughter said that it needs a house so they made one out of Lego. Thanks a lot for sharing and sorry that it took so long to publish it. If you are interested in his code please leave a comment on this page.

My good colleague Peter Kohler (@hb9tvk) gave me the first introduction on how to use a 3D printer. He has done some cool projects like a morse code trainer for another colleague or a digitizing his analog water meter with a 3d printed sensor lid. And he also recently designed a wonderful case for the WeatherStation color. If I remember correctly he designed it with a latch so there is no need for screws on the enclosure. Thank you a lot for sharing Peter and for your constructive feedback about the code!

Enclosure by my colleague Peter (@hb9tvk), designed with OpenScad

Olly Klassen (@NemosNautilus, http://olly.ch/) is living also in Switzerland and he is famous for his home theater  which is a detailed steampunk reconstruction of the interior of the Nautilus, you know, the famous submarine of captain Nemo from 20.000 Leagues Under the Seas by Jules Verne. But Olly is not only good with mechanical tools, he can also program. He added another frame to the OLED WeatherStation and is displaying the current time it would take for him to drive home from his office. On top of that he included an RGB LED which is displaying the current traffic situation with one color: green means everything fine, with yellow he has to expect about 10 minutes of delay and red tells him to stay in the office and to wait for the traffic jam to disappear. The enclosure is a pretty little jewelry box he repurposed for the traffic indicator. He wrote me that he plans to build a nice little steam punk case. I’m looking forward to the update once he is finished with it. He loads the traffic information from the Google Maps API for which you need to acquire an API key

Adafruit’s take on the WeatherStation Color

If you are into DIY electronics you must have come around Adafruit Industries (@Adafruit) and their founder Limor Fried AKA LadyAda. They are an open source hardware company and also contributed a lot of open source libraries for all kinds of devices. Shortly they are doing what I would love to do for a living. So you can imagine how happy I was when I found my WeatherStation Color project being presented on their page with detailed building instructions. Thank you Adafruit for sharing!
Detailed build instructions: https://learn.adafruit.com/wifi-weather-station-with-tft-display/overview