A Diversion from all the Bitx40 Stuff! 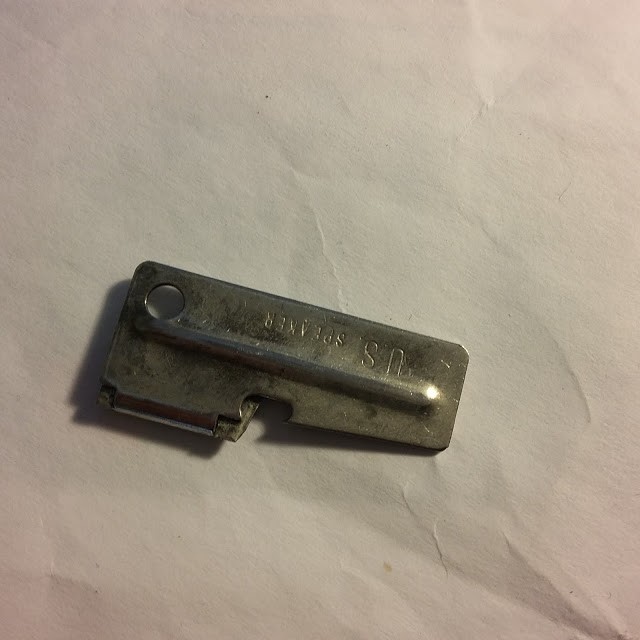 
Does anyone in Radio Land know what this is?

OK do you give up? Well guys and gals this is the world’s most important tool vintage 1965 if you were in a forward combat area and wanted to eat. Yes this foldable, carry on your key chain, (along with your dog tags) is a can opener! I have had it on my key chain for the past 52 years and serves as a reminder of another time and another place.
In May of 1965 while assigned to MCB Ten (US Navy Mobile Construction Battalion Ten) as a part of the US Marine Corp RLT4 (Regimental Landing Team 4). RLT4, we made the first over the beach amphibious landing since the Korean War. It was a heady time filled with excitement as we landed on the beaches of Chu Lai, South Vietnam about 90 miles south of DaNang.
With such a landing comes combat rations (for about two months) known as MIC’s which stands for Meal Individual Combat. The MIC’s came in cases of 12 meals and included in every case were several of these tools and a pack of heat tabs so you could have a warm meal.
There were four selections of MIC’s and included Turkey Noodle Loaf, Beanies and Weenies, Hot Ham Hunks and Hamburgers which  literally were packed in axle grease. Accoutrements might include a small bread in a can along with grape jelly, cheese and crackers and the most coveted canned peaches. The cheese and crackers were actually medicinal in nature and you usually did not eat those immediately but held on to them for when you got the “Green Apple Quick Step” AKA GI Trots, AKA The Runs. Eating one portion of the cheese and crackers would plug you up quicker than any Kaopectate or Imodium! It seems like the crackers were designed so when taken with water expanded to about 10X their size –so you really felt full (bloated is more like it).﻿
Being in the “Seabee’s” the first thing you learn to do is to take the can opener and using a spent can from the Beanies and Weenies (taller can)  build a small stove so you can efficiently heat your food. The heat tab went in the bottom of the can and with proper vent holes cut in the can itself –instant stove. (This was my first opportunity at learning metal working skills which has paid big dividends today.)
There also was included in every MIC a small pouch that had cigarettes, toilet paper and a spork — that was a plastic spoon with serrated teeth on the end so it was a combo spoon and fork. I think there might have been some other stuff in there but it was kind of clever. I think later on they removed the cigarettes –getting killed with bullets is just a day’s work but lung cancer was not approved.
The reason for this posting was that recently I tripped over a whole series of you tube videos where individuals actually take the various combat meals and try to explain them It goes from the K Rations to C Ration to the MRE’s of today. It is very obvious that the narrators never had to eat these meals. They just didn’t know!
My assignment at MCB 10 was the Intelligence Officer and as such I had access to the classified safes. In the Spring of 1965 it was very obvious to me that we would be headed to South Vietnam and would transition  as the alert battalion on Okinawa to an in country location. In preparation for the deployment I cleared space in one of the files so it would hold six bottles of Johnny Walker Black Label whiskey. There was some benefit to being the only one who had access to the classified safes! At the time I had a 1st Class Petty Officer working for me and he approached me about his also placing something in the classified safe. I said OK — well as it turns out his contribution was a very small box that contained 12 bottles of what is shown below:

At first I thought he was nuts; but so be it! Well as it turned out my 1st Class Petty Officer was a veteran of the Korean war some 15 years earlier and he knew all about C rations. After a short while I traded him 3 bottles of Johnny Walker for three bottles of the hot sauce. The only way you could eat those MIC’s was with hot sauce.
Being the Intelligence Officer meant I had to have special security clearances which later came back to bite me. On a second trip to Vietnam where I was TDY it bit me. I was on a commercial contract flight (DC8) that was just about to depart Travis Air Force base when I heard my name called out over the PA and was asked to come forward. There were two Air Force officers there who then asked me to show my ID card which I did. One of them then said stick out your left wrist –I did. Boom the next thing I know they slap a handcuff on my wrist an attached to that was a courier pouch. It seems like this was highly sensitive information that could only be carried by someone with the appropriate clearance.
The next couple of statements were kind of frightening where I was advised to shoot anyone who tried to get the pouch from me and he was about to hand me a gun. I said I have a 45 in my brief case but no ammo –he got me two clips. of 45 ammo. The next statement was I could not leave the plane until I was relieved of the pouch in Honolulu.
Did you ever try to snooze in a packed  airplane with a pouch handcuffed to your left wrist. Going to the head for a pit stop was a barrel of laughs. The heads are really small and not much room for you AND the pouch. Well at the other end I had to wait 1 hour for someone to show up –it was not a fun trip! I keep thinking about trying to board an airplane today with a 45 in your brief case!
73’s
Pete N6QW﻿
﻿
﻿
﻿
Previous PostNext Post
BROWSE